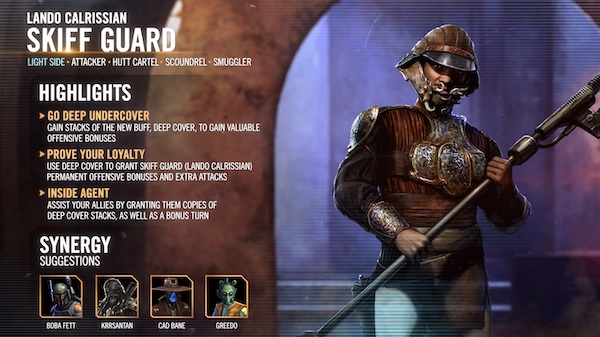 Welcome to the best mods for Skiff Guard (Lando Calrissian), latest article in our series about the popular game Star Wars Galaxy of Heroes where we take a look at the best mods for each SWGoH character. While I do not claim to have all of the answers in this game, I do my research and have used every toon I write about extensively. These are mod recommendations and they are certainly not the only option. However we look to help players maximize their characters in SWGoH and we are always open to feedback if you have a mod setup that works well of your gameplay. 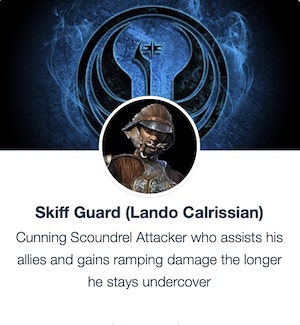 Today’s character to review is Skiff Guard (Lando Calrissian), an August 2022 addition to SWGoH leading up to the release of the Galactic Legend Jabba the Hutt. The previous Landos have been offensively designed with critical hits being at the center of their attacks – the original Lando Calrissian focused on critical hits and his AoE, and Young Lando as part of the Prepared squad. In Galaxy of Heroes, Skiff Guard Lando relies more on stacking Defense Penetration and Offense from a variety of unique buffs. He is a Light Side Attacker which is a Scoundrel and Smuggler and a member of the Hutt Cartel faction. Let’s take a look at the early thoughts on the best mods for Skiff Guard (Lando Calrissian).

Main Focus: Speed. While his base Speed if just 158, right in the middle of all SWGoH characters and far slower than recent additions like Admiral Raddus or the Inquisitors, because he is an attacker and has the potential to be a very high Offense character, mods sets with very high Speed secondaries are recommended. I am not suggesting a Speed set due to the slower base Speed, but very high secondary stats are needed.

Additional Areas to Focus: Offense, Potency, Critical Chance, Critical Damage and survivability in the forms of Protection & Defense. When looking at Offense versus a CC/CD focus, an Offense set feels like the best option here. Skiff Guard Lando gains stacking Defense Penetration based on the stacks of Deep Cover he has, and +30% Offense when he is a Trusted Agent. Beefing up his Offense will only help make this more effective. Potency is needed to land more debuffs on the Skiff Guard’s enemies and allows his Agent On The Inside special attack to be more effective when he has Hutt’s Favor, but keep in mind that SGLC does gain +10% Potency for each stack of Deep Cover. All Offensive characters can benefit from added CC and CD, so add this where it makes sense, but do not sacrifice more Offense or Speed to do so. Survivability is always important, and while we have a lot to learn about the Hutt Cartel faction still, how it plays into the Skiff Guard’s kit will be interesting. For now, added Defense and Protection are the ones to focus on given his base stats are in the Top 25% of all SWGoH characters for both Armor and Protection, but check back when we get Jabba in-game.

In-game Mod Suggestions: Offense & Critical Chance. This is not terribly surprising, and we still have a lot to learn about the Hutt Cartel in the game, so I see no reason to argue this in any way at this point.

As mentioned above, Offense is key to Skiff Guard Lando and while the devs say more Crit Chance, added Defense or Potency is not a bad idea either. Here are my thoughts on the best mods for Skiff Guard Lando Calrissian: