The offensive phase for Alliance Wars lasts 24 hours and allows players to attacks the specific zones shown below and score points for their Alliance. Note that we are working to add more content around effective Offensive Counters in Alliance Wars. This is a work in progress and we will be adding to this list and editing regularly. Thank you for your patience, and if you want to contribute in any way Tweet us @GamingFansDFN anytime.

Brotherhood – Defenders – within 10% power, Jessica Jones is a must to dispel debuffs

Wakandans – SHIELD – within 15% power, take out Shuri as quickly as possible

The faster you and your alliance mates can cripple your opposing alliance’s offense, the better, as it will help your defense tremendously. For that reason, I think the Armory is the priority target. Assuming that the opposing alliance has already destroyed your Armory, destroying the Barracks would put you on an even playing field. If they haven’t destroyed your Armory, though, you will have a massive stat advantage.

The Medbay comes in third because of the insane Health Buff it offers, and getting rid of all three of these things will help you a ton with the bigger rooms. The Bridge should almost always be next, as it’s a massive amount of points. If you can knock out this room, you’re in good shape. The same goes to the Reactor, but focus the Bridge first. If you can’t take the Bridge, and you’re only down 50, then reactor is the way to go.
The quicker you can knock out certain rooms, the more likely it will allow you to win. Offensive Priorities come first, points come directly after. For example, if you are choosing to attack the Bridge first, but your opponents choose your Armory and/or Barrack, you are at a disadvantage.

It’s also good to know how to open up rooms. If you want to move down, you have to beat 8 teams of one, single player. If you want to move left or right, you have to clear the room of both players. The best attack path is debatable but I find going down the left or right side first is the best option and a lot of alliances will stack heavy defensive teams in the middle to slow you down.

Also don’t be afraid to start a new line if you hit a massive roadblock, let’s say you attack Flight Deck 1, then move down and find Cargo-Bay, you clear one side and move down and find their Bridge and it’s stacked with all 250k teams. Well instead of banging your head against that wall have everyone start attacking Flight Deck 3 and move down. Finding and removing those defensive buffs are way more important than the 200 points at the start.

Lastly don’t get greedy, if you have Security half beaten and you open up the Barracks below it, it may be better to finish off the Security room and remove the defense down buff it gives to the Barracks. Clearing it will be that much easier. 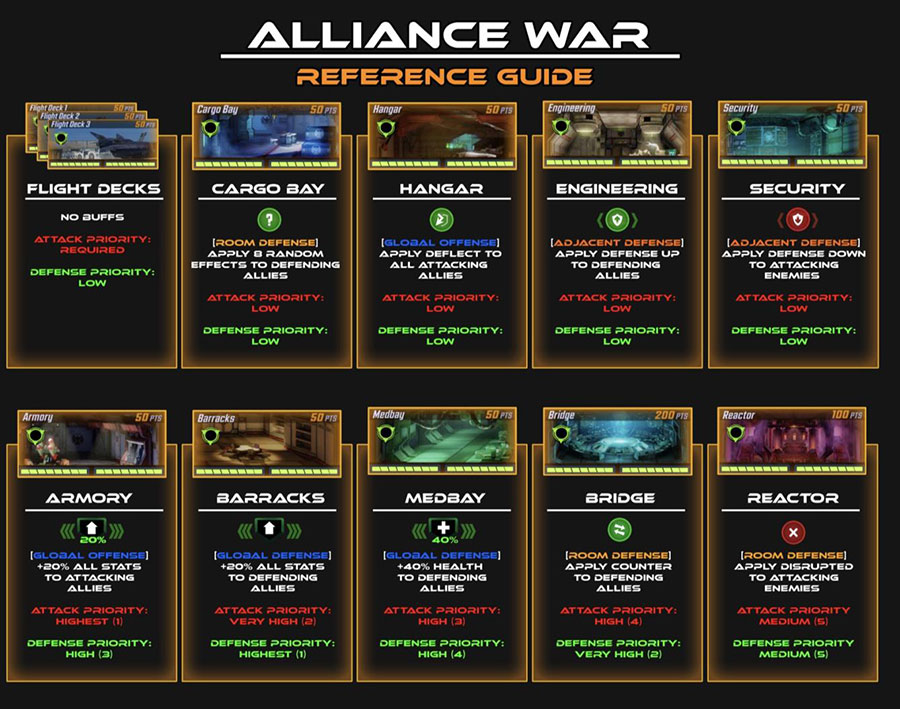