After being teased on multiple occasions that two “fan favorites” were coming to Star Wars Galaxy of Heroes, we now have the opportunity to unlock Grand Admiral Thrawn in the Artist of War event. Five weeks after introducing R2-D2 to SWGoH, unlocking Thrawn was what many feared – controlled by how strong your Phoenix Squadron toons are. This has caused quite a stir amongst the SWGoH community which, apparently expected everything to be handed to them on a silver platter. 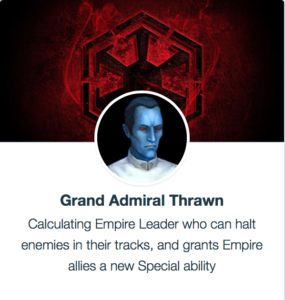 Personally, I am happy to have a (basically) free 5-star character and enjoy the challenge of getting him to 7-stars in the next week. Unlocking him at 5-stars was really no challenge, but I am hearing 7-stars is incredibly difficult. I will keep you posted on that last one in 4-5 days.

As for Grand Admiral Thrawn in-game, his kit is incredibly unique. Having read the Thrawn novel and after watching every episode of Star Wars Rebels Season 3, the SWGoH event for Thrawn is quite appropriate and well-done. While more gameplay is the key to seeing how Manipulate will work in longer battles, the granting of Speed Up to a enemy only to Ability Block or Stun them later is rather interesting. His first special, Fracture, has Phase 3 of HAAT written all over it and will be a lot of fun to test it out. Grand Admiral’s Command, another special, is the cleanser that the Empire needed as both Thrawn and a select ally have all debuffs dispelled while trading turn meter and recovering 40% protection. 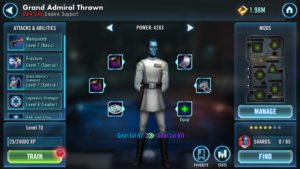 Thrawn has two Zeta abilities, one on his leader ability, Legendary Strategist, and the other on his unique, Ebb and Flow. The unique is indeed just that – the high Counter Chance and Tenacity in exchange for reduced speed seems to tie into the Manipulate basic attack and I look forward to testing these out more. Meanwhile his Leader ability grants Empire allies +15% max protection, +25% offense and more.

Looking ahead the best mods for Grand Admiral Thrawn, my early thoughts are to do whatever we can to increase Protection. Potency should not be needed given the basic reads “can’t be resisted” and Fracture reads “This attack can’t be Evaded or Resisted.” I am thinking speed first (like almost everyone), then offense, defense and protection as the main focuses knowing that CC/CD could easily be in the mix.

I will be glad to add more as time allows today and throughout the weekend as I plan to get more gameplay with Thrawn under my belt so I can further analyze this interesting kit.

[…] shifting Meta. Click the graphic below to view this latest SWGoH video and don’t miss the Grand Admiral Thrawn in SWGoH review from […]

[…] to announce that we will be live blogging today as our Director of Content Luke looks to unlock Grand Admiral Thrawn at 7-stars. Fans can follow along throughout the day as he updates us all on his success or failure […]

Should I Buy the Phoenix Squadron Ultimate Bundles? - Gaming-fans.com

[…] hinted in the past weeks, Grand Admiral Thrawn has returned in his Artist of War Legendary Event! Acquiring Thrawn requires five of six Phoenix […]