Originally a weak character in Star Wars Galaxy of Heroes, Episode VII star Kylo Ren, aka Ben Solo, got a rework in January 2017 and quickly became one of the best characters in SWGoH. 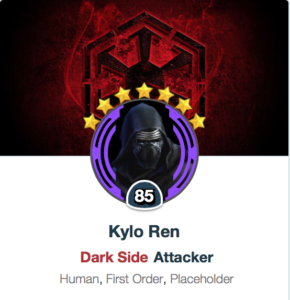 The Kylo Ren Zeta ability was one of the early Zetas in SWGoH. Per the game text, Kylo Ren’s Outrage special attack with a Zeta ability reads “Deal physical damage to target enemy and, if Kylo has full Health, inflict Stun for 1 turn. This attack deals 75% more damage if Kylo is below full Health. Recover Protection equal to the damage dealt.” The key from the Zeta is the “Recover Protection equal to the damage dealt” part – thus if you hit for 30k you gain 30k protection. This can be extremely valuable in any long-term battle (Galactic War) or a long Arena battle provided you keep his health up as well as characters like Sith Assassin and Savage Opress can be a real pain in the rear. The main counter to his protection recovery is Healing Immunity which prevents the regain of protection and the Stun and Ability Block debuffs which do prevents Zylo from using the special attack as often.

Gameplay: Kylo Ren gameplay with a Zeta is one of the most enjoyable I have found to date. Because he was my first Zeta, I maxed him out to use in the Arena, and I have gone “all in” on Zylo. Along with the Arena, I have used him extensively in HAAT and in the Galactic War since the protection recovery is like a having a self healer which helps in the long-term.

Squad Arena: Using a Zeta Kylo Ren in the Arena has saved my skin more than once. If you have the right mods on Kylo, he can hit very hard and will start with a lot of protection, thus a hit for 30k like I mentioned above is indeed possible. Plus, because Outrage can stun the target, I have seen 1 versus 3 battles go to Kylo Ren in the end due to the stun and protection recovery. 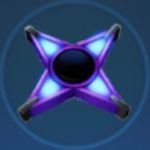 Rancor: Used with an entire First Order team in the The Pit, aka the Rancor Raid, Kylo Ren and his FO crew can do massive damage. If your Guild requires a one character sacrifice to get on the board before a FFA after pause, Zylo is one of your best choices as the protection recovery comes in quite handy. In addition, the Rancor will place debuffs on you so that speeds Kylo up for more frequent attacks.

AAT/HAAT: When Kylo Ren got the rework back in late January 2017, I wrote about how the new version of Kylo fit into the AAT/HAAT. Soon thereafter we learned that Zylo could solo Phase 1 of the Heroic Tank Takedown. In addition, a full First Order team in Phase 2 of HAAT can also put up big numbers. Overall, if you do not have a full First Order team with multiple Zetas on them, your best bet is to use Kylo Ren with an all-Jedi team or all-Sith team in Phase 1 of HAAT and pull in your 250-450k each time.

Territory Battles: The Zeta ability on Kylo Ren was not relevant in the original version of Territory Battles since it only dealt with the Light Side, but the addition of the Dark Side’s Territory Battles: Imperial Retaliation, “Zylo” shows his value yet again. With no healers in the First Order, Kylo’s Protection regeneration comes in quite handy while also offering a chance to Stun the target.

Territory Wars: How Kylo Ren’s Zeta will impact Territory Wars in SWGoH is still in the early stages. We will be happy to add more thoughts on how this Zeta translates in the near future.

How I Use Kylo Ren: My use of Zylo is extensive; he was a part of my Top 10 Arena team for a long time, he was commonly used on Nodes 6, 9 and 10 in the Galactic War when needed (when I need my big-hitters) and I used him in Phase 1 of HAAT before getting General Kenobi to 7-stars. While the game has continued to evolve since his Zeta ability was at it’s peak value, it still remains a top-tier Zeta in SWGoH. Kylo does have a ship which is now farmable but appears to have greater future value now that the First Order has four total ships in SWGoH, so a strong Kylo Ren makes the ship much more powerful. Now with the Dark Side having a Territory Battle of their own, my Zylo is used in a First Order squad.

My Rating of Zylo: My rating for Zylo Ren or whatever you want to call him) is a 8.5 out of 10. I am trying to reserve a 10/10 for the best of SWGoH, and with a Zeta on Kylo he is pretty awesome, but not the best in my opinion.