Since my article where I stated that Reports of Zaul’s Death Have Been Greatly Exaggerated, I must admit that my Zeta Darth Maul team basically failed me in Star Wars Galaxy of Heroes. After a nice run that week with zMaul, I saw my team fall to the 15-30 range consistently before finally dropping Maul as my leader in mid-June. After a 2-week run with Zeta Darth Vader leading the team once again which saw me struggling to stay in the Top 10, I decided to click a link in a Line chat on July 4th and have jumped back to the top of my Arena Shard once again. That link? It was to this video from Cubs Fan Han discussing his strategic use of Grand Admiral Thrawn. 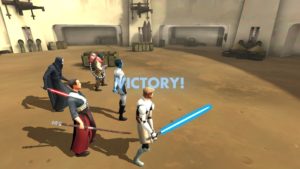 The Details: All toons have six 5-dot mods except for GK who has a single 4-dot mod. All toons are 7-star and gear 11 with only Thrawn not maxed out.

The Results: After a 4-0 start I paid for a 50 crystal refresh and locked in the #1 spot on July 4th with a 9-0 record on the day. I dropped as far as #12 today but was able to win all 6 battles for the day and get #1 yet again. I now stand at 15-0 with the new squad leaving one Shard member saying to me “I just fought your team and got crushed. It’s dramatically better than Rex lead.”

Day 3 – After a single battle last night after payout for placement, I fell to #18 today and had to climb back up. But another perfect day saw me reach #1 for the 3rd straight day in 6 battles. This puts this team at 22-0 thus far – way more impressive than my zMaul team that was a consistent contender for the #1 spot ever was.

Day 4 – Another battle last night for placement as I held on to #4 until mid-day when I fell to #7. Three wins later, the final with seconds to spare, earned me another #1 finish at payout today. Now sitting at 26-0 on offense with this team.

Will this team work for you and your roster? Honestly, without the gear I do not know. What I can tell you is that it works great for me and hopefully it can help you as well. Special thanks to Cubs Fan Han – you will see a lot more of his content here at Gaming-fans.com in the future!

SWGoH: A Breakdown of the New Gear 12 Pieces & What You Need To Know

3 Comments on "SWGoH: The Squad Arena Team that Vaulted Me back atop my Shard"