Territory Battles: Imperial Retaliation – the new Dark Side Territory Battle – is set to start in Star Wars Galaxy of Heroes this weekend. Beginning on November 23rd (Thanksgiving Day in the United States) and running through November 28th, the Dark Side Territory Battle will also be set on Hoth with a few changes to the original round of Territory Battles, now called Rebel Assault. Instead of 45 stars, the Imperial Retaliation version will have 48 stars possible and instead of 6 encounters the battles will feature 4 encounters. Please note that any of this info is subject to change as much of this content is dynamic.

Colonel Starck, Imperial Probe Droid, General Veers, Snowtrooper, and Darth Vader are the Hoth Hero style units and will be required units for Special Missions in Territory Battles: Imperial Retaliation. While a lot of the information the GameChangers have received is dynamic and continues to be adjusted, it appears that Colonel Starck will be the ROLO (Rebel Officer Leia Organa) of this Dark Side focused TB. 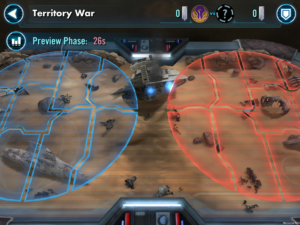 To add to the craziness, after the Thanksgiving Holiday weekend is complete the first Territory Wars is expected to start on November 28th, beginning with a 24-hour preview phase. Then, if all goes according to plan, the second Territory Wars should start on December 1st.