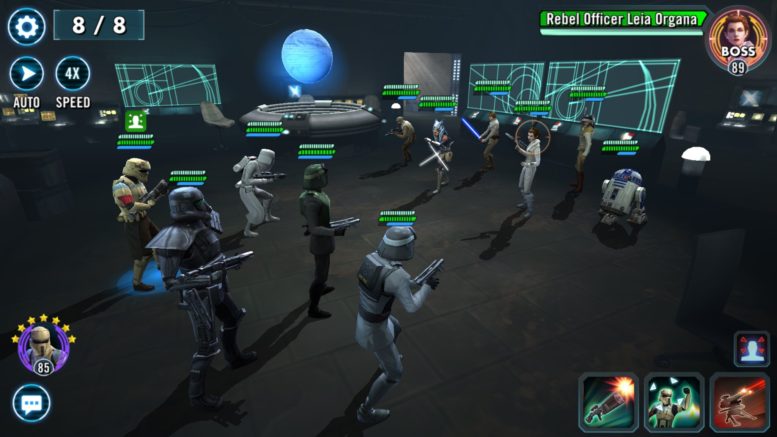 I am going to walk you through how to beat Rebel round up using imperial troopers. For this walkthrough I will be covering the Bonus Tier only, if you can beat the Bonus Tier you should be able to hit auto on the lower tiers.

Protip before you start, the event special ability should only be used under one circumstance, when Deathtrooper has stunned a target. If they are stunned they cannot dodge and this is the only time the event ability is useful.

This wave is actually critical, with a poorly geared Shoretrooper this is where my team either wins or loses. If anyone dies here you will need to restart. But most times Baze will dispel your taunt (do not reapply) and the damage will be spread out. You will want to save Veers AOE for Chirrut and hit him with it, most likely this will kill him outright and make the rest of the fight very easy.

As always whenever it is available on Starck use Scan all Wavelengths, after this his next move should always be Blizzard Four Barrage, assuming there are enough enemies remaining to make it worthwhile. If necessary use Deathtrooper’s dispel to clear a path to chirruit for your Veers AOE. Once Chirruit is down kill the rest they pose little threat. (Pro tip, Pao and Bodhi die easy and provide fast TM to the team.) Snowtrooper should always AOE as long as there are 3 or more targets.

This wave is very easy, focus down Jyn first to remove her revive, then take out Cassian as he can deal big damage. After that kill in any order you prefer.

This wave is generally very easy as long as you know the correct target order. Kill Kanan first, he provides counters and lots of healing to the team, so he dies first – if Deathtrooper can stun him with a double tap use the event ability to finish him off while stunned. Otherwise use Veers AOE to focus him down.  Second target Ezra as he can provide a lot of damage and with him gone there is little threat left. Third target Sabine, after Ezra she is literally the only damage dealer left. For me at this point Sabine has soaked up enough AOE damage that she tends to die in one hit. Now you can kill the rest in any order, but the least annoying would be Chopper so he cannot taunt and dodge.

The only real difficulty here is that Lando and Lobot have a ton of health, I like to focus on the guards at first to get my turn meter going, but Lando remains the primary target, if you can stun him with Deathtrooper you will want to focus him hard. This is also the wave where Deathmark will be invaluable as it will let you clear Lando or Lobot quickly, but you need a guard dead first.

This wave is pretty simple, kill Wedge first and then pick off the rest.

Again like wave 5 this one is simple, kill Ackbar and then the rest.

Again another simple one, kill Han with the Veers AOE and then slaughter the rest, nothing hard here, but save your specials for the last wave, you will need them

This wave is the tough one, ideally you want to stun CLS and then focus him down hard, R2-D2 has a ton of health so he will keep messing up your targeting. I prefer to leave Rolo and Fulcrum until last they are not much of a damage threat – that is mainly CLS. Use the other two for some TM gain if you can. Once the first enemy is down you will want to put Deathmark on CLS and then hit him with everything you have. Again if you can get him stunned use the event special on him.

I don’t have shoretrooper even close. I do have zetad veers gear 12+Stark,death,snow,gear10. Magna gear 9. Very good mods alot of speed.i get to last battle do something wrong and whole time is a waste on bonus tier. It just takes so long. Thanks for hint about death mark. Will try ….