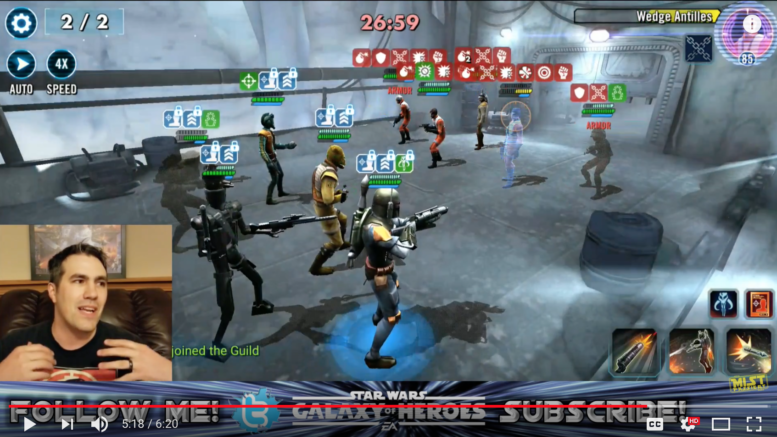 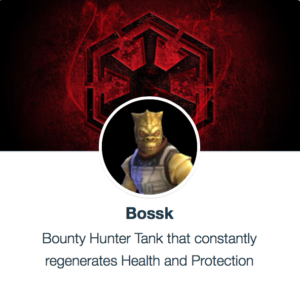 Main Focus: Speed. Bounty Hunters, with a few different squad makeups, are commonly used in both Territory Wars and the Grand Arena Championships on defense. The most effective of those teams, from my experience, has a very tanky and very fast Bossk. So while survivability must be a major focus of Bossk, having a very fast Bossk who taunts before an enemy can reduce his TM or place Ability Block on him (RJT) is going to be highly effective. This really has not changed over time either as in the second half of 2021 a fast Bossk is still very helpful to get your Bounty Hunter team to work effectively.

Additional Areas to Focus: Survivability in the forms of Health, Protection and Defense as well as Tenacity, Critical Chance and Critical Damage. Bossk’s basic, Prey On The Weak, deals double damage when you target the weakest enemy and is a guaranteed Critical Hit, so adding Critical Damage will only make this hit harder, but note that Bossk has the second lowest Max Damage stat in SWGoH of all Bounty Hunters, so do not waste valuable resources trying to make him an offensive threat. Survivability is always essential for a tank, and given many have a high Relic Bossk due to the value of the Hound’s Tooth as well, further enhancing his Defense, Heath and Protection is a very wise move. His Trandoshan Rage unique grants him +50% Defense and +50% Max Health while he has Taunt, so beef both of these stats. Bossk also receives 5% Health and 5% Protection at the start of his turn and 2.5% of both when a Bounty Hunter ally starts a turn whenever he receives reward from a Contract per his Bossk’s Payout unique. Added Tenacity will also help Bossk avoid Ability Block, Shock and Buff Immunity and ensure he is even more effective in protecting his Bounty Hunter allies.

In-game Mod Recommendations: Speed & Defense. No disagreement here as this is the exact combo I am recommending above.

The “ideal mod setup” can be interpreted a few different ways, but apparently Capital Games agrees with my assessment given they recommend Speed and Defense. A Speed set of four mods can be in play, especially if you are looking to get an exact turn order from your Bounty Hunters, but a blend of Defense, Health and/or Tenacity mods is also an option. Here are my recommendations for mods on Bossk in SWGoH: