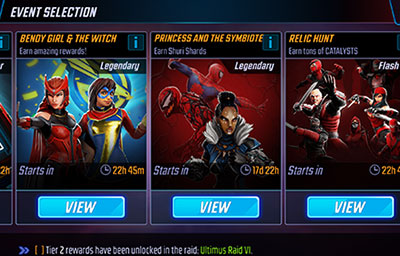 The Princess & The Symbiote event takes place for the first time in Marvel Strike Force beginning on Thursday, April 25th, 2019 starting at 8 pm ET. Interestingly enough, the Legendary Event for a not-so-legendary character in the MCU takes place on opening night of Avengers: Endgame, so could Shuri being a Legendary character in MSF be foreshadowing her role in the movie? (Pure speculation, no spoilers here!)

Opening Legendary characters is always important for competitive players and fans alike in Marvel Strike Force, and Shuri looks to be an essential piece of an effective Wakandan team. Below I will chronicle what it takes for me to open Shuri, knowing full well that where I start with this may not be enough to open the Wakandan Princess. My goal is to keep as many resources stored up as possible to use on Shuri and continue to build up my Wakandan faction, but if the roster below cannot get the job done I am not afraid to dip into the wallet a bit to ensure that the final result is a new legendary character.

The Princess & The Symbiote legendary event requires a combination of 5 Spider-Verse characters to unlock Shuri, who opens at 5-stars (310 shards).

I saw Avengers: Endgame tonight so I am starting my battles at 10:35 pm ET.

Tier 1 – Shuri, Okoye and Black Panther all join the Spider-Verse faction. Piece of cake with this team, 15 shard of Shuri and 100 credits are the reward.

Tier 2 – This battle requires you to protect Carnage who is super weak on my team. Luckily the enemies did not go after him so I got an easy win along with 30 shards of Shuri, 750 Mega Orb Fragments and 1k gold.

Tier 3 – Facing multiple Carnage, Mordo and Mercenary enemies, this was the first battle where I had characters down to yellow health. That having been said nobody died and the win was rather easy. 55 shard of Shuri, 1,250 Mega Orb Fragments and 20k gold was the prize.

Tier 4 – I expect the test will begin at Tier 4 given the weakness of Carnage and Green Goblin on my roster, but I want to save the resources for others if I can. The battle begins with Guardians and Carnages and eventually more Guardians and Doctor Strange join the battle while Okoye and Shuri fight with you. Nothing terribly difficult about this battle but I did almost forget to take our Doctor Strange who has that revive ability that is so annoying. The prize for winning is 80 shards of Shuri, 2k Mega Orb Fragments and 100k gold.

Tier 5 – I am quite excited to get this far without trouble, but this should be a challenge given my roster. Nevertheless, I am holding out hope that my Spider-Man and Spider-Man (Miles) can bring home the win in Tier 5.

M’Baku joins the team along with Shuri and the Spider-Verse five. We’re facing Killmonger, Hawkeye and a Mercenary Riot Guard to start. I killed Hawkeye first and got Miles to drop a Disrupted debuff on the MRG, but after a couple of attacks on Killmonger, Iron Man, another Hawkeye, War Machine and Merc Lieutenant showed up. My Carnage got killed once they attacked and I took out Hawkeye with Spidey then got M’Baku to taunt. Attempting to pick off enemies is tough as Killmonger is very tough on this team. I was able to get the opponents down to just Killmonger and Merc Lieut and took advantage and focused everything on Killmonger to kill him off. 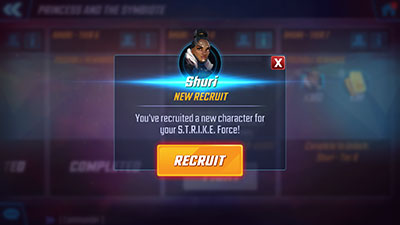 Tier 7 – TBD – Note that I will not be getting Shuri at 7-stars this time around, but I will update this in the future when the time comes.

The Princess & The Symbiote event has returned over Labor Day weekend in the USA and my schedule is winding down now so I can finally attack today, on September 2, 2019. Here is a look at my attempt(s) to upgrade Shuri to 6-stars with the now-expanded Spider-Verse characters in MSF:

I am going with the Top 5 on the list above for my attempt to upgrade Shuri to 6-stars since they are the only eligible characters based on star levels.

Tier 6 – Shuri, M’Baku and Black Panther all join the Spider-Verse faction to face 12 enemies, all Kree to start and Minn-erva glowing gold. The taunts from the Kree Royal Guards proves to be the biggest annoyance. Once I survive their attacks and remove Minn-erva a new group comes and the taunts are again an annoyance, but not a big deal. I lose Green Goblin since he is weak, but my Spidey boys really lead the attacks with Venom complementing them until I get Black Panther rolling. In the end the battle is a relatively easy one and a 6-star Shuri is now mine.

02.03.2020 – The Princess & The Symbiote event has returned during the first week in February and I am eager to get this solid character to 7-stars. Here is a look at my attempt(s) to upgrade Shuri to 7-stars with the expanded Spider-Verse characters in MSF:

I am going with the Top 5 on the list above for my attempt to upgrade Shuri to 7-stars as my Green Goblin is not as good a fit as Rhino who has 5-red stars. This is not far from the minimum required team labeled by Khasino’s infographic (I am just 194k power) for the event back in April 2019, so I am anticipating this being very close or my needing to invest into these characters to win.

Tier 7 – Shuri, Killmonger and Black Panther all join the Spider-Verse faction to face 19 enemies, with several AIM as well as Juggernaut and two Pyros. After knocking off three of the enemies Magneto arrives with some friends and blinds most of my characters. Once I take some hits I clear this group leaving 9 enemies to beat. I blind Pyro and take a few hits from the Brotherhood enemies, then continue to trade hits until just 5 enemies remain and I am only down Black Panther so far. I continue to chip away as the number eventually turn in my favor and I am victorious. 300 shards of Shuri and 1m gold are my rewards.

Be the first to comment on "MSF: Unlocking & Upgrading Shuri – Princess & The Symbiote Live Blog"