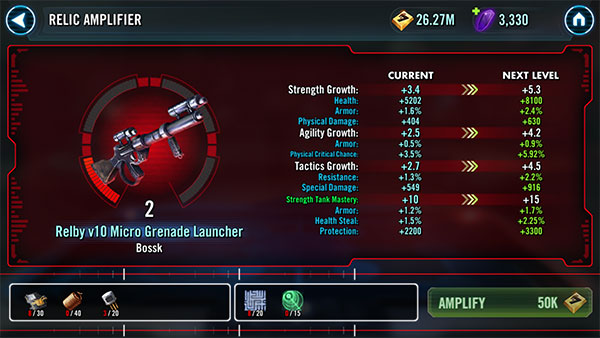 Continuing the Relic Review series, we take a look at Bossk’s Relic upgrades and the impact it has on the game. As always these reviews compare a character at Gear 13, Relic Level 0 with Relic Level 7, and mods are not factored in.

For Bossk, his Relby v10 Micro Grenade Launcher is his Relic of choice in SWGoH. His statistics impacted include Health, Physical & Special Damage, Armor, Resistance, Physical Critical Chance and finally Protection and Health Steal from his Mastery.

Defensively, Bossk gets a nice Health boost of 19,728, just over a 50% increase, bringing him to 58,999. He is one of the 20% of characters in the game to gain Protection from his Relic, gaining 9,900 Protection as a result. Bossk gets a 14.99% boost in Armor, one of the highest Relic gains in SWGoH, which takes his Gear 13 Armor stat of 40% to one of the game’s best at 54.99%. Meanwhile, a below average gain of just over 6.6% Resistance puts Bossk at an average 37.77% overall. While Bossk does not gain any Deflection or Dodge Chance, he would have benefitted nicely from Physical or Critical Avoidance in my opinion, but the Relic does nothing to boost these stats either.

On the offensive side, Bossk does gain 1,534 Physical Damage which is one of the lowest gains from Relics in the game, and we can ignore the much larger gain in Special Damage increase since he only deals Physical Damage. He does gain 15.58% Physical Critical Chance to bring his overall Physical CC to a very nice 61.71%. Finally, while he does gain 6.75% Health Steal, there are no Accuracy, Resistance or Armor Penetration increases to his stats.

As we look at Bossk’s place in today’s SWGoH, he remains a must-have on top-tier Bounty Hunter teams and his ship is probably the second best ship in the game today (some may argue the best). As a result of these two facts, Bossk will get a higher rating than others with similar gains simply because he is such a valuable character in multiple game modes.

Because of the items mentioned above I am rating Bossk’s Relic as a High Priority, but there are several that I will be prioritizing before Bossk.