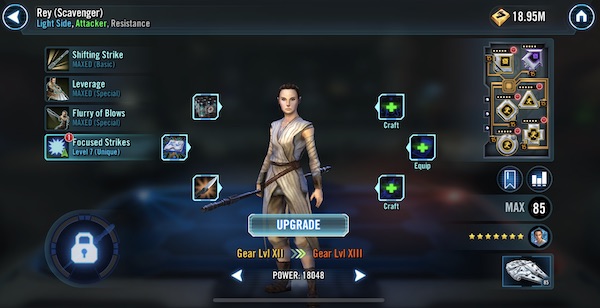 In another edition of the Relic Review series, this article will take a look at Rey (Scavenger) and her Relic, the Salvaged Quarterstaff. As always, these reviews compare a character at Relic level 0 to Relic level 7 and mods are not factored in.

Starting off, Rey (Scavenger) gains a solid 17,910 Health increase. She also gains respectable increases to Armor and Resistance, 12.5% and 7.09% respectively.

While the stat increases from her Relic are fairly good overall, Rey (Scavenger) has limited viability in the game. She only fits in a Resistance team, but at the same time she is usually not a top 5 character within her own faction. Because of this, I am putting her in the lower end of the Medium Priority tier. However, if unlocking Galactic Legend Rey is a priority for you, Scavenger Rey moves to the middle area of the High Priority tier.