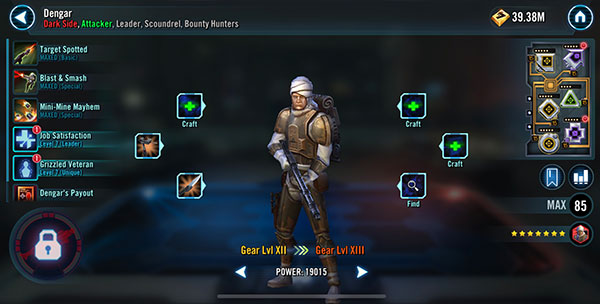 Continuing the Relic Review series, we take a look at Dengar’s Relic, the DLT-19 Heavy Blaster Rifle, and the impact it has on the game and his stats. As always these reviews compare a character at Gear 13, Relic Level 0 with Relic Level 7, and mods are not factored in.

Defensively, Dengar gets a very nice Health boost of 19,728 which is one of the higher Relic increases. Given all characters except for the Top 13 get between 16,812 and 19,746 this is not a huge advantage over the field, but it is a nice gain nonetheless. While Dengar does not gain any Protection, he does receive a below average 10.86% increase in Armor and an average 8.91% increase in Resistance – neither is impressive comparatively speaking. This completes his defensive gains as he does not gain any Deflection or Dodge Chance, nor does he add any Physical or Critical Avoidance. Given he is usually in Stealth mode this is not a huge drawback, but let’s take a look at his Offense gains below.

On the offensive side, Dengar, is a dealer of Physical Damage in Galaxy of Heroes, gets a boost of 2,705 Physical Damage from a Relic Level 7, one of the highest damage gains in the game. An 18% increase in Physical Critical Chance brings a maxed out Dengar to just over 63% CC, which is great for a character with a CC-driven ability like his Mini-Mine Mayhem special. A 13.5% increase to his Physical Accuracy is a nice addition, but the +90 Resistance and Armor Penetration is going to be key. His total Armor Penetration stat is 300 after leveling him up to Relic 7, the 13th highest AP number in the game. The Special Damage and Special Accuracy gains can be ignored since Dengar does not deal Special Damage.

As we look at Dengar and how he fits into SWGoH today, he remains a key player on the top Bounty Hunter team used in the game. However, one could argue that Bounty Hunters are a mid-range value as a squad, as they are certainly not close to the Top 5 in the game. I was personally curious due to the fact that Bounty Hunters can be quite helpful in the Genonosis: Separatist Might TB after reading Zalandas’ write-up on Jango Fett, but honestly Dengar’s stats, comparatively speaking, just do not wow me. Looking at his high mid-range value in the game, I am rating Dengar’s Relic as a Medium Priority.