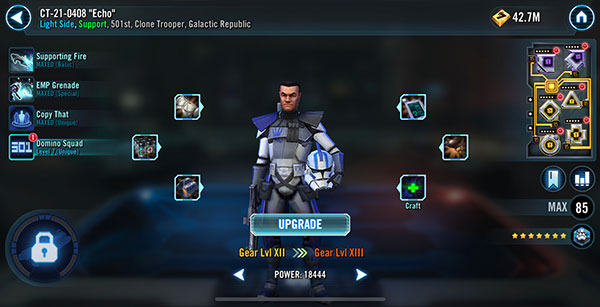 Continuing the SWGoH Relic Review series, this article focuses on CT-21-0408 “Echo” and his relic, DC-15A Blaster Rifle. As always, these reviews compare a character at Relic level 0 to Relic level 7 and mod enhancements are not factored in.

Echo receives a below average Health increase of 16,812, bringing his total Health to 51,064. This is complemented nicely by the 14.45% Armor increase and 9.56% Resistance increase Echo gains from his Relic. In addition, he sees a 13.5% boost to both Physical Critical Avoidance and Special Critical Avoidance.

Echo’s Physical Damage and Physical Critical Chance both see middle of the road gains, 2,170 and 16.54% respectively. His special ability will benefit greatly from the impressive 3,334 Special Damage increase. Finally, Echo gains a 13.5% increase to both Physical Accuracy and Special Accuracy, helping to ensure that his attacks hit their mark.

Echo is a key member on any clone used in SWGoH today, and with the Light Side map of Geonosis Territory Battle coming in November, his value is trending upward. However, I am not very impressed with most of the stat gains from his Relic upgrade when compared to other characters in the game. Considering these factors, I’ve placed Echo in the upper end of the Medium Priority tier.