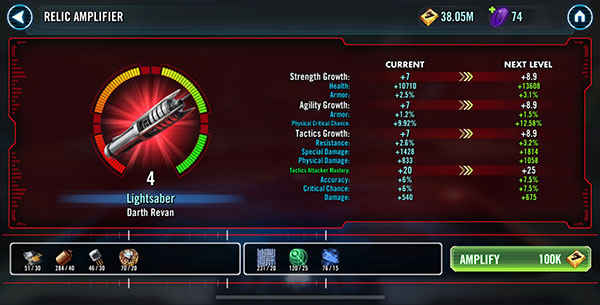 In another addition of our SWGoH Relic Review series, this article will take a look at Darth Revan and his relic, a lightsaber. As always, these reviews compare a character at Relic level 0 to Relic level 7 and mod enhancements are not factored in.

Looking at his defensive and survivability numbers, Revan sees an above average 19,940 Health increase. When Bastila Shan (Fallen) is under a Darth Revan lead, her unique increases his Max Health by 70%, bringing his total to an impressive 96,998. Unfortunately the increases to his Armor and Resistance are both mediocre compared to the gains of other characters, being at 9.65% and 6.41% respectively.

Looking at Darth Revan’s offensive numbers, first we see a 3,805 Special Damage increase, taking his final number to 8,756. Because Ferocity increases his offense by 8% for each count of the debuff, the damage gain from Revan’s relic will have an even bigger impact. Revan sees a meager 13.5% boost to his Special Critical Chance, bringing his total to a disappointing 31.63%. Luckily, his leader ability adds 10% Critical Chance for each debuff he has so his Critical Chance will be close to or over 100% at virtually all times. Even though Darth Revan receives a 13.5% Special Accuracy increase, the benefit is reduced by the fact that both of his specials can’t be evaded. Because Darth Revan only deals Special Damage, the increases to his Physical Damage, Physical Critical Chance, and Physical Accuracy can be ignored.

Darth Revan is the leader of the best team in the game and a Sith Empire team can excel in every game mode because of him. I have no doubt that he will be a high value character for quite a long time. While most of the stat gains from his Relic are below average or not usable, combining his Health and Special Damage increases with his overall place in the game puts Darth Revan in the upper end of the High Priority tier for me. There are a handful of arguably more important relics to level but Revan is one of the best characters to invest in at this time.

SWGoH: Darth Revan is coming to Galaxy of Heroes

Be the first to comment on "SWGoH Relic Review: Darth Revan"