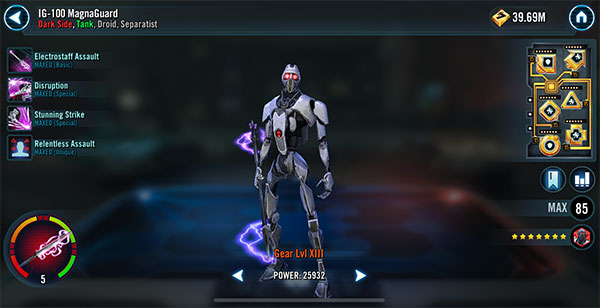 Gaming-fans.com has been a staple in the Star Wars Galaxy of Heroes community since the beginning. From our Mod Guides and breaking news as an EA GameChanger to our Sith Raid Guide and more, our site seeks to help educate players about this highly complex mobile game. With Relic Amplifiers now in the game, Gaming-fans.com has you covered as we seek to continue to make the community smarter when it comes to how to get the most out of Star Wars Galaxy of Heroes.

Continuing the Relic Review series, we take a look at the Relic for IG-100 MagnaGuard, his Electrostaff, and the impact it has on the game and his stats. As always, these reviews compare a character at Gear 13, Relic Level 0 with Relic Level 7, and mod enhancements are not factored in. The stats mentioned are based off of the data provided by the fine people at swgoh.gg.

Looking at the survivability and defensive stats, IG-100 gets a Health boost of 19,746 which is on the high end of the Relic upgrades given all characters except for the Top 13 get between 16,812 and 19,746. He also is one of the select few characters in SWGoH to gain Protection from his Relic with +9,900. MagnaGuard gets a 12.96% Armor increase which is sure to help improve his survivability as well as 6.34% Resistance gain. While the Armor increase is above average compared to the rest of the Relic gains in the game, the Resistance gain is one of the worst gains in the game, although consistent with many other tanks in SWGoH. Health Steal is a stat that only a handful of characters improve from their Relic, and IG-100 MagnaGuard is one of those lucky ones gaining +6.75% Health Steal.

On the offensive side of things, IG-100 MagnaGuard gains 1,536 Physical Damage from his Relic upgrade which is one of the lowest increases found from a Relic, but also not a major part of his kit since he is a tank and not an offensive character. A Physical Critical Chance gain of 15.54% is also nice boost, but not terribly impactful. He does gain Special Damage from his Tactics Growth, but given MagnaGuard only deals Physical Damage, this gain is irrelevant. No Dodge or Critical Avoidance stat gains come from his Relic, so this rounds out the defensive gains.

IG-100 MagnaGuard is very important piece to a Separatist Droid team that is very important in SWGoH in the Grand Arena Championships, Territory Wars and has obvious value in the Geonosis Territory Battles. His Health, Protection and Armor gains are significant, and any added Resistance helps as well given his role on this team is to soak up the hits. When you compare his high value in the game to the stat gains above, specifically in survivability, this leads me to a Medium to High Priority grade for IG-100 MagnaGuard.