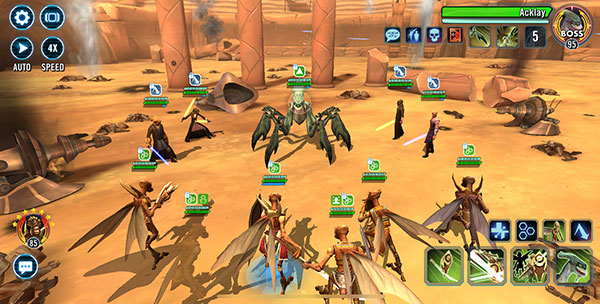 Continuing the Relic Review series, this article will take a look at Geonosian Brood Alpha and his Relic, the Geonosian Glaive. As always, these reviews compare a character at Relic level 0 to Relic level 7 and mods are not factored in.

Starting off, Geonosian Brood Alpha gains a very nice Health increase of 19,440. He also gains an 11.41% Armor increase and an 8.12% Resistance boost. Since he is the most important of the Geonosian faction to keep alive in battle, these survivability increases are nice additions.

On the offensive side, GBA sees a disappointing Physical Damage increase of just 1,512. This is made up for, in part, by the 18% increase to Physical Critical Chance. In addition, he sees an increase of 90 to both Armor Penetration and Resistance Penetration. Geonosian Brood Alpha also has a buff dispel on his basic and a mass dispel and Expose on his special, so the 13.5% Physical Accuracy increase will help ensure these useful abilities aren’t evaded. Finally, Alpha gains a meager 6.75% Health Steal bump. Because Alpha only deals Physical Damage, the increases to his Special Damage and Special Accuracy from his Relic upgrades can be ignored.

Geonosians are a highly valuable team in many game modes (especially the dark side map of Geonosis Territory Battle) and Alpha is essential for the team to be successful. While the stats from his Relic are a mix of good and disappointing, having a summoned units whose stats scale with Geonosian Brood Alpha’s doubles the value from this Relic. Because of these factors, I put Geonosian Brood Alpha in the lower end of the High Priority tier.