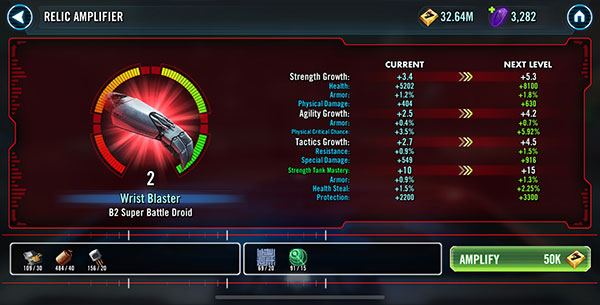 Continuing the Relic Review series, this article will focus on B2 Super Battle Droid and his relic, the Wrist Blaster. As always, these reviews compare a character at Relic level 0 to Relic level 7 and mods are not factored in.

To start off, B2 Super Battle Droid receives a top tier Health increase of 19,746 taking his total to 56,289. While his 13.14% Armor increase is quite impressive, the 5.11% Resistance boost is a bit underwhelming. In addition B2 is one of the few characters to gain Protection from his relic, seeing a 9,900 increase to that stat.

On the offensive side, there are three stats to look at for B2 Super Battle Droid. The first is a 1,536 Physical Damage increase, taking his total to 4,662. The second is a useful 15.54% Physical Critical Chance boost. Finally, B2 gains an additional 6.75% Health Steal. While B2 isn’t known for his damage, these increases will become noticeable with how often he attacks because of his two uniques. Note that because B2 Super Battle Droid only deals physical damage, the increase to his Special Damage can be ignored.

While B2 Super Battle Droid is usually put with a Separatist Droid team under a General Grievous lead, he is a highly versatile character that can fit in several teams to counter buff-heavy enemies (B2 makes it much easier for Traya to beat JKR for example), and he is very useful in several game modes. In addition, the final tier of General Skywalker’s event is currently the hardest battle in the game and leveling B2 Super Battle Droid’s relic will make that fight “easier.” While the stat increases from his Relic aren’t top-tier overall, the factors I just mentioned put him in the lower end of the High Priority tier for me. There are many better options but investing in the B2 Super Battle Droid certainly isn’t a waste.

Be the first to comment on "SWGoH Relic Review: B2 Super Battle Droid"