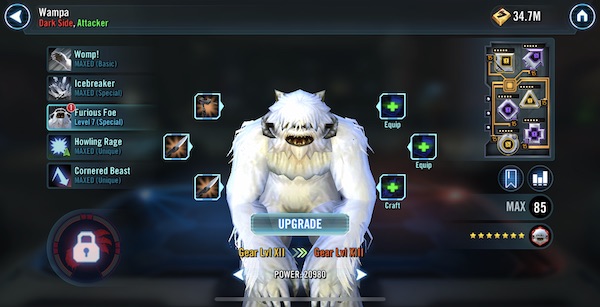 Continuing the Relic Review series, this article will take a look at Wampa and his Relic, the Tauntaun Feast. As always these reviews compare a character at Relic level 0 to Relic level 7 and mods are not factored in.

On the defensive side, Wampa gains a solid 19,746 Health increase. The value of this stat boost is higher than usual because Wampa’s Protection Up mechanic from his Icebreaker special is based on his Max Health. In addition he sees an 11.31% Armor increase and an 8.01% Resistance boost.

Wampa receives a 2,706 Physical Damage increase and a 17.96% Physical Critical Chance increase, both very useful for an attacker. He also sees an increase of 90 to both Armor Penetration and Resistance Penetration. The final stat increase is a 13.5% boost to Physical Accuracy. Because Wampa only deals Physical Damage, the increases to his Special Damage and Special Accuracy can be ignored.

The stat increases from Wampa’s Relic feel average to me. They aren’t the best in the game but they aren’t the worst either. However, Wampa is in an odd place currently because his lack of tags makes it difficult for him to synergize well with any commonly used team. Because of these factors I am placing him around the middle of the Medium Priority tier.