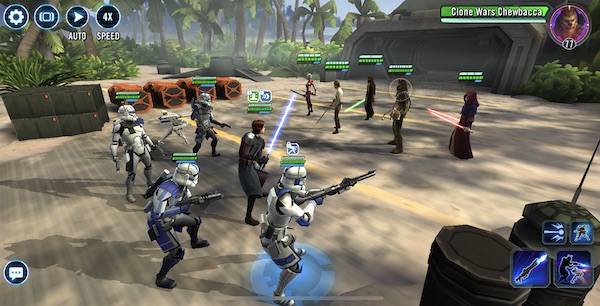 Welcome to the ARC Trooper mods guide, the latest in our series about the popular game Star Wars Galaxy of Heroes where we take a look at the best mods for individual SWGoH characters. While I do not claim to have all of the answers in this game, I do my research and have used every hero I write about extensively. These are mod recommendations based on the character’s kit and actual gameplay to help you in your quest to dominate the Galaxy of Heroes holotables. 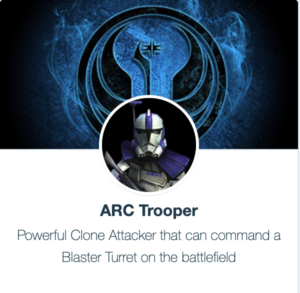 Today’s toon to review mods for will be the ARC Trooper, the most recent addition to the Clone Trooper and 501st factions. In SWGoH, the ARC Trooper has a kit that enhances the value of Clone Troopers around him and includes a Blaster Turret that is summoned to join in the ally slot of your battle and assists in many 501st member attacks. While he was added to the game for use in the Geonosis Territory Battle, the ARC Trooper has a lot of value in today’s game. Let’s take a look at the best mods for ARC Trooper to enhance his already solid kit of abilities.

Main Focus: The ARC Trooper is an Attacker in SWGoH and his Blaster Turret’s stats “scale with the summoner’s stats.” Thus, enhancing the ARC Trooper’s offensive stats – Offense, Critical Chance and Critical Damage – are the main areas to focus on from mods.

Additional Areas to Focus: Speed, Offense, Critical Chance, Critical Damage and survivability. The ARC Trooper starts off faster than most with 177 Speed when maxed out, the 16th highest base Speed in the game. Given his Speed is already very solid, my recommendation is to enhance this stat through secondary mod stats only and use an Offense or CD set with a CC set and save the Speed mods for other characters. High Offense in the secondary stats as well as enhanced Critical Chance is wise, and since the Blaster Turret will benefit from the offensive focus as well, it too will hit harder as a result. The ARC Trooper has +35% Counter Chance per his ARC Arsenal unique ability, so adding some Defense and Protection to improve his survivability seems wise. Under a General Skywalker lead, 501st allies should look to enhance their Defense and Protection stats, and if you are using Rex as a leader with ARC Trooper, additional Health would be your best move.

In-game Mod Recommendations: Offense & Critical Chance. No disagreement here as his kit is fairly straightforward and geared toward heavy attacks. The only other combination of mods I could see if the use of a Critical Damage set in place of the Offense set, but that may be based on the individual’s mod inventory.

Modded correctly, the ARC Trooper can be a major damage dealer on any Clone or 501st team he is a part of. Here is a look at the best mods for the ARC Trooper, based on your mod inventory:

SWGoH: Primary Stats and Their Significance

Be the first to comment on "SWGoH: Best Mods for ARC Trooper"