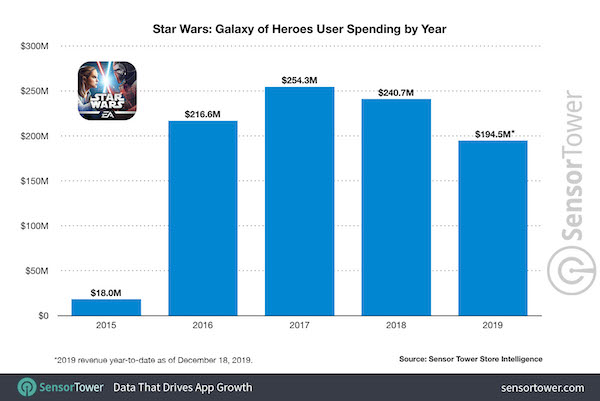 Looking at the stats, SWGoH now has over 70 million unique installs globally since the game’s November 2015 debut. In addition, with over $900 million in lifetime revenue as of December 2019, the trends show that Star Wars Galaxy of Heroes will easily surpass the $1 billion mark in 2020. This data and associated bar graph comes from a December 20 article from Sensor Tower, an industry publication that covers the business of mobile games. It indicates that 2017 marked the highest year for the game’s revenue at over $250m, with 2019 continuing a slow decline at nearly $200m. Overall, these numbers do indicate a healthy game (financially), however the community is quite aware of the overall lack of new content and attention to detail shown throughout 2020. While Capital Games has revealed that many new things are in the works, it will be interesting to see if the Star Wars franchise and a potential influx of new players around The Rise of Skywalker will be enough to offset the decline in annual revenue as we are now in 2020.