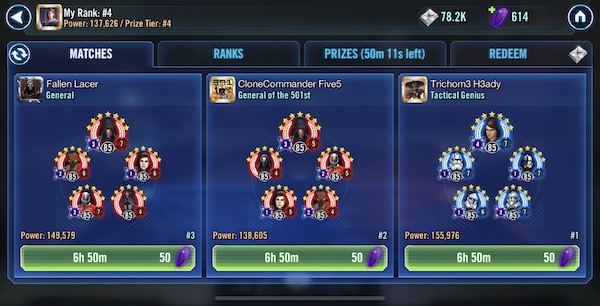 We begin the SWGoH Squad Arena Guide here at Gaming-fans.com with How to Beat General Skywalker’s 501st Team. Since his (money grab) addition to Star Wars Galaxy of Heroes, General Skywalker has slowly worked his way to the top of the game, due in large part to the ridiculous 5-star unlock of GS and the grind to get the Guild Event Tokens to buy his shards. But with that having been said, defeating GS, especially a 7-star version, if no easy task. Below our newest writer, ohpoodoo, evaluates the strategy of battles with GS, or as he so appropriately calls him, G$.

The Problem: General Skywalker’s protection has to be cut through before you can attack the other 501st troops. He gets +25% defense, +25% tenacity, and +15% protection for each 501st ally (basically all comps will have 4 501st allies, giving him +100% defense and +60% protection increase which makes it very difficult to get through his protection and it’s essentially impossible to land most debuffs).  His damage ramps up as the fight goes on as well (the team gets +2% stacking damage for every buff added on your team until the fight is over). Each time you hit G$, he counters back (anyone who double attacks takes 2 back, assists and stealthed toons of course don’t suffer counters). If you do manage to get through that protection and get G$ to kneel, you’re faced with getting through the 501st allies before G$ stands back up (very few teams can survive multiple topples). Your choices are to barrel through Fives who counters (and hits pretty hard himself), or to kill another clone ally which triggers his sacrifice (from his Tactical Awareness Zeta) which gives other 501st clone trooper allies his max health, max protection, speed and offense stats in addition to their own for the remainder of the battle (basically means if you kill another first you better not let the other Clones go again). If you do manage to get all of the 501st allies eliminated, you then need to take down a G$ with ramped up damage who can’t be critically hit (he does cleanse when he is crit so at least he won’t cleanse during this) and kill him before he kills you. Plus he gets 35% turn meter every time your team gets a turn once he’s alone.

Current Meta Composition: For this guide, we are assuming you are facing General Skywalker (G$), Rex, Echo, ARC Trooper and Fives. We are also assuming that the team you are fighting is one of the best of the best; a fully Relic 7 team with amazing mods and all of the Zetas. Most of the testing videos in this guide were done against the 2 MAW flagship teams that my shardmates and I often have to fight each day in arena. They’re the whaliest of the whales from the 2nd largest guild in the world. Their guild has made it a habit of dominating everyone in TW for quite a while. You won’t find many teams that are better than these in the world.

If using a Darth Revan composition, you must answer one important question before proceeding: Can my Darth Revan outrun their G$? G$ gets a 20% speed bonus from Rex unique so take G$ speed x 1.2  and that’s G$’s actual speed. The G$ I have to fight each day is 261 speed currently (261*1.2 = 313.2 so as long as my DR is above 315 I know I’m safe). If you can make your DR faster than your opponent’s G$’s actual speed, proceed to option A. If not, proceed to option B.

Be the first to comment on "SWGoH: How to Beat General Skywalker’s 501st Team"