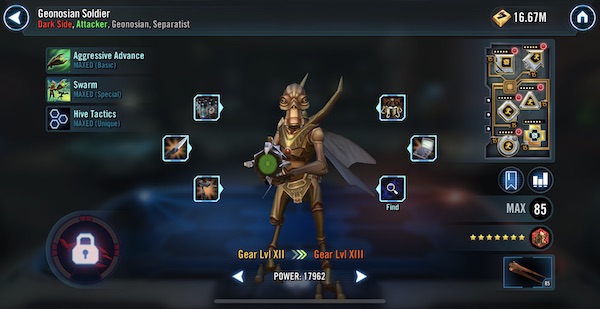 Continuing the Relic Review series, this article will take a look at Geonosian Soldier and his Relic, the Sonic Blaster. As always these reviews compare a character at Relic level 0 to Relic level 7 and mods are not factored in.

First off, the Geonosian Soldier gains a 17,910 Health increase. In addition, he gains respectable increases to Armor and Resistance, 11.24% and 7.93% respectively to round out the survivability increases.

Looking at the offensive numbers, Geonosian Soldier gains an excellent 2,883 Physical Damage increase. He also receives a good 13.5% Critical Damage bump. The impressive Physical Critical Chance increase of 33.88% brings his final number to 84.21% CC. However his unique gives him an extra 15% Critical Chance, taking his total to 99.21%. Because Geo Soldier gains 25% turn meter every time he crits and assists every time a Geonosian ally uses an ability (when Geonosian Brood Alpha is present), he will gain massive amounts of turn meter throughout the battle and greatly increase the number of turns he will take. Because Geo Soldier only deals Physical Damage, the increases to his Special Damage and Special Critical Chance can be ignored.

While a full Geonosian team is the main home for Geonosian Soldier, he is a key member and the team is highly valuable throughout the game. In addition he gains very good stat increases from his Relic. I am going to place him in the upper end of the Medium priority tier.

Be the first to comment on "SWGoH Relic Review: Geonosian Soldier"