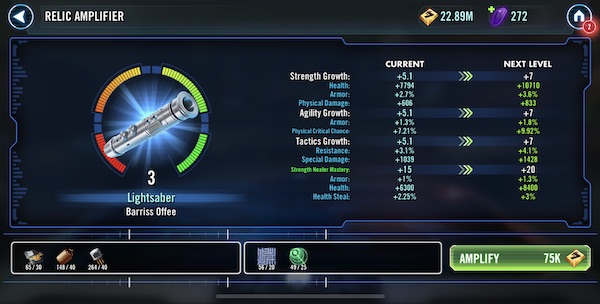 In another entry to the Relic Review series, this article will take a look at Barriss Offee and her Relic, a Lightsaber. As always these reviews compare a character at Relic level 0 to Relic level 7 and mods are not factored in.

To start off Barriss Offee gains a massive Health increase of 38,340, tied for the largest increase in the game. This brings her total health before mods to 75,461, and if you mod her for health as we recommend in the best mods for Barriss Offee in SWGOH, you can really maximize her abilities. She also receives strong boosts to both Armor and Resistance, 13.17% and 7.74% respectively.

While Barriss Offee’s Physical Damage increase of 1,512 is quite small, her role is not to deal damage. She does also receive an additional 18% Physical Critical Chance and a notable 6.75% Health Steal bump.

Barriss Offee is a solid healer who can fit well on a Padme or Jedi Knight Revan led team thanks to her Jedi and Galactic Republic tag and she has found her way onto teams with Galactic Legend Rey. She is an excellent healer and cleanser whose Relic greatly improves her most important stat – Health. Unfortunately she will not reach her full potential until or unless CG reworks the Galactic Republic Jedi faction. As a result of all of this, Barriss Offee’s Relic is in the middle area of the Medium Priority tier.

Be the first to comment on "SWGoH Relic Review: Barriss Offee"