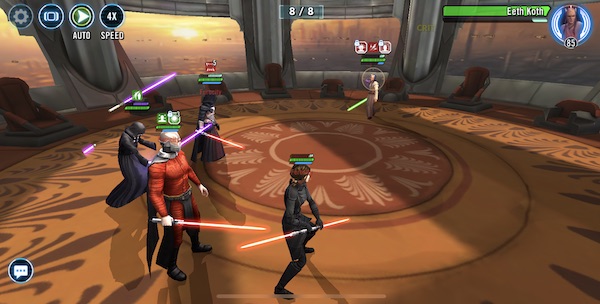 Assault Battle are recurring events in SWGoH that pit users against specific factions and limit the characters that can be used to battle. Star Wars Galaxy of Heroes upped the difficulty in the Assault Battles in early 2020 adding new rewards and much more difficult battles. The addition of Challenge Tier I introduced Gear 12 finisher gear pieces as rewards while Challenge Tier II added Relic materials to the prize for winning. The Assault Battles: Places of Power event uses Sith or First Order characters facing Jedi for the price, and below are the notes of what has worked for me.

Note that I was able to beat this event with Emperor Palpatine using the same mods, but at Relic 3 as well.

Battles 1-3 – You face Jedi who are very fast but not dangerous. Land Stun debuffs when you can or spread Shock around and have BSF use her Wild Lightning special on one of the Shocked enemies to weaken all enemies to speed these fights up. Spreading Fear on the enemies is also quite effective. Note that if you take out the leader of each battle/wave (Aayla Secura in Battle 2, etc.), the character with the green Potency-style icon that represents the Morale Boost buff for the battle, this removes the High Morale buff. High Morale grants all allies +25% Defense, Health, Offense and Speed. Low Morale, which occurs when you defeat this character, lowers Defense, Health, Offense and Speed by 25% for all allies.

Battle 4 – Jedi Knight Anakin starts with Morale Boost alongside Ahsoka Tano, Jedi Consular, Rex and Fives as our enemies to defeat. I focus on JKA first, and the key is surviving his AoE attack, but assuming you survive it the Health Steal of these characters and added Protection from Darth Traya can help you heal back up. After killing JKA I just take out the rest one by one.

Battles 5-7 – Ima-Gun Di (Battle 5), Kit Fisto (Battle 6) and Luminara Unduli (Battle 7) are the “leaders” of these battles, each with Morale Boost, so the same strategy applies – kill the leader first. About halfway through the 7th battle I use only basic abilities in an effort to have all specials available in the final battle.

Battle 8 – This is the real challenge. For the purpose of this article, I started with the 5 Jedi ganging up on Emperor Palpatine and killing him, so this presented a fun challenge. GM Yoda is a total pain in the butt, and with no Palpatine to Stun the Jedi, I have BSF add her range of debuffs then Traya Isolates General Kenobi and Darth Revan adds fear to the group. I take out Qui-Gon Jinn first and when the ability comes up I have Darth Malak use Drain Life on GK to setup the long-term success of the battle. Keeping Shock on at least one Jedi throughout the battle is quite helpful as it allows BSF to continue to whittle away at their Health and Protection with her Wild Lightning special. I used the event-specific Dark Gambit after Malak’s last turn to get him to go again sooner, so that when Drain Life is available again I can either finish off GK or severely weaken GMY. I use it on GMY which puts him in yellow health and after killing GMY I take out GK and hit auto for the win.