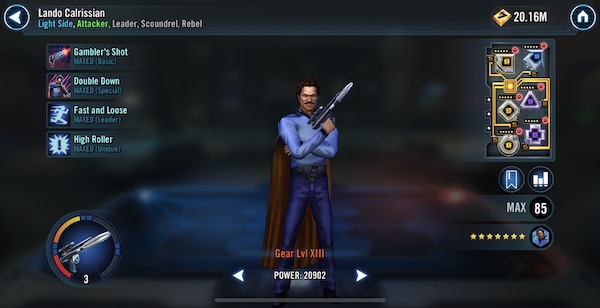 In the newest addition to the Relic Review series, this article will take a look at Lando Calrissian and his Relic, the DH-17 Blaster Pistol. As always these reviews compare a character at Relic level 0 to Relic level 7 and mods are not factored in.

To start off, Lando Calrissian gains a below average Health increase of 17,910. He also receives strong increases to both Armor and Resistance, 12.2% and 7.3% respectively.

Lando Calrissian has very good Relic stat increases that complement his role as an Attacker well. Unfortunately, he has a very outdated kit that limits his viability across the game despite his dual tags of Rebel and Scoundrel. This causes him to be in the lower end of the Medium Priority tier. If you factor in that Lando is required to unlock Jedi Knight Luke Skywalker, he moves up to the lower end of the High Priority tier.