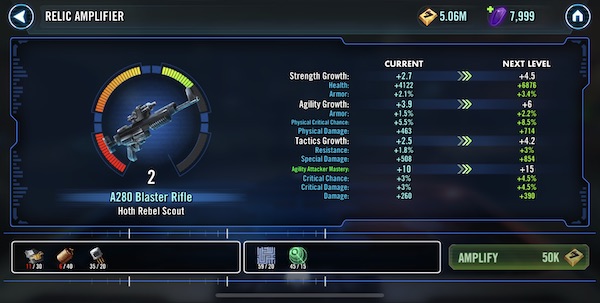 Gaming-fans.com has been a staple in the Star Wars Galaxy of Heroes community since the beginning. From our character Mod Guides and breaking news as a EA GameChanger to our Sith Raid Guide and more, our site seeks to help educate players about this highly complex mobile game. With Relic Amplifiers in SWGoH for some time now, Gaming-fans.com has you covered as we seek to continue to make the community smarter when it comes to how to get the most out of Star Wars Galaxy of Heroes.

For the generic Hoth Rebel Scout, the A280 Blaster Rifle is his Relic in SWGoH. His statistics impacted include Health, Armor, Resistance, Physical Critical Chance and both Physical and Special Damage. His role as an Agility Attacker impacts his Mastery stats increasing Critical Damage & (a total waste) Special Critical Chance.

Hoth Rebel Scout is a character that has peaked with only moderate use in Star Wars Galaxy of Heroes, used mostly in the Hoth Territory Battles event. As a first month player of SWGoH, I used HR Scout to unlock Emperor Palpatine in the first Emperor’s Demise event, so I have always has a Hoth Rebel Scout who was decently geared. With the addition of Mon Mothma to SWGoH and the new Rebel Fighter tag, however, Hoth Rebel Scout is among several Rebels who have been given new life. His offensive potential and Turn Meter gains pair well with Pao and have at the very least made them both relevant in SWGoH in mid-2020. However his stat increases are good but not great. Factoring all of this in, I rank Hoth Rebel Scout’s Relic in the lower to middle area of the Medium Priority tier.

Be the first to comment on "SWGoH Relic Review: Hoth Rebel Scout"