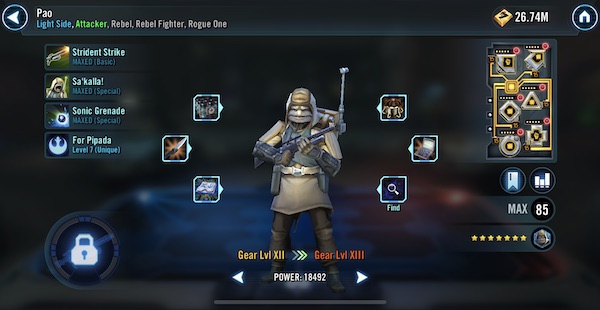 For the little-known Rebel Pao, his Tibanna-Jacked Blaster Rifle is his Relic in SWGoH. His statistics impacted include Health, Armor, Resistance, Physical & Special Critical Chance, and both Physical and Special Damage. His Mastery stat increases impact his Critical Damage & Special CC.

To start off, Pao gains a Health increase of 17,910, a middle-of-the-road gain when compared to all Relics in SWGoH. In addition, Pao gains an above average 12.2% Armor increase and a 6.93% Resistance increase which is in the lower third of all Relic increases.

Pao’s Relic upgrades are focused on his role as an Attacker as he gains a strong Physical Damage increase of 2,884 which is tied with many others for tops across all Relic upgrades and fits with our mod recommendations for Pao. In addition, he sees a fantastic 33.92% Physical Critical Chance increase and an additional 13.5% Critical Damage. While at Gear 13 Pao already has 54.58% CC, a now maxed Pao at Relic 7 checks in ay 88.5% CC. Finally, Special Damage and Special Critical Chance gains are also included in his Relic increases, since Pao only deals Physical Damage this stat can be ignored.

While the Pao had a brief run of relevance in Galaxy of Heroes on the Chex Mix team in Phase 3 in the early days of the Sith Triumvirate Raid, outside of that Pao has been a bottom 5-10 character, which is fitting given his tiny role in Rogue One. With the addition of Mon Mothma to SWGoH and the new Rebel Fighter tag, however, Pao is among several Rebels who have been given new life. His offensive potential and Turn Meter gains certainly have made him relevant in SWGoH, and with all of this factored in, I rank Pao’s Relic in the lower to middle area of the Medium Priority tier.

Smithie D’s thoughts on SWGoH Rogue One Toons being Farmable

Be the first to comment on "SWGoH Relic Review: Pao"