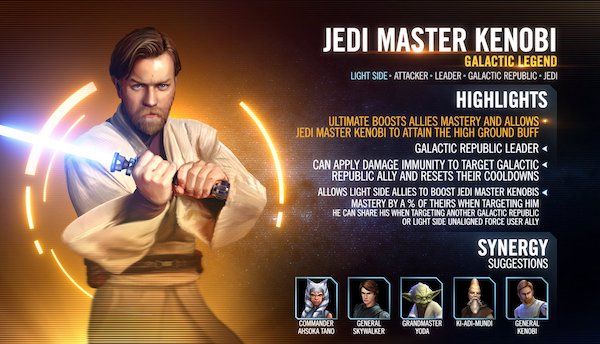 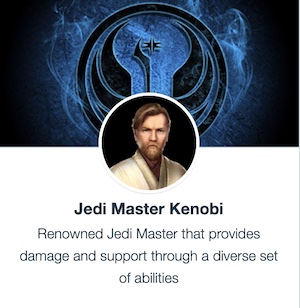 Main Focus: Speed. Speed is a must on 95% of the Star Wars Galaxy of Heroes collection, and given the high Speed stats for Galactic Legends and the fact that Jedi Master Kenobi is an Attacker, speeding him up like Supreme Leader Kylo Ren is the logical choice. All Galactic Legend characters in SWGoH have base Speeds ranging from 365-398, while the fastest non-GL character in the game is at 198, so the 15% boost from a set of four Speed mods is far greater for these elite characters. JMK comes in at 385 – right in the middle of the other four Galactic Legends at the time of this writing.

Additional Areas to Focus: Potency, Critical Damage, Offense, Health and Protection. Potency will help his basic, Ardent Bladework, and his I Will Do What I Must special land valuable debuffs for your team to take advantage of. Given his role as an attacker, additional Offense and Critical Damage make a lot of sense to ensure he is hitting hard and Critical Chance will help as well, especially at lower Gear levels. Adding as much Health and Protection is wise as all Galactic Legends have some element of Health built into their kits that makes them extra survivable, and since the Hello There special recovers both stats I would look to enhance them. Note that as a Leader, Jedi Master Kenobi boosts Light Side allies with “+25% Mastery, +30 Speed, and +25% Max Health. Galactic Republic allies gain Protection Up (75%, can’t be dispelled) for 4 turns.”

In-game Mod Recommendations: Critical Damage & Health. My early thoughts do not align with this, but part of my influence is how my guild is choosing to mod JMK for Territory Wars, so more on this in time.

The “ideal mod setup” can be interpreted a few different ways. If you target Speed, Offense, Potency, Critical Damage, Health and Protection through the mods you should be able to maximize JMK’s kit. Here are my recommendations for the best mods for Jedi Master Kenobi: