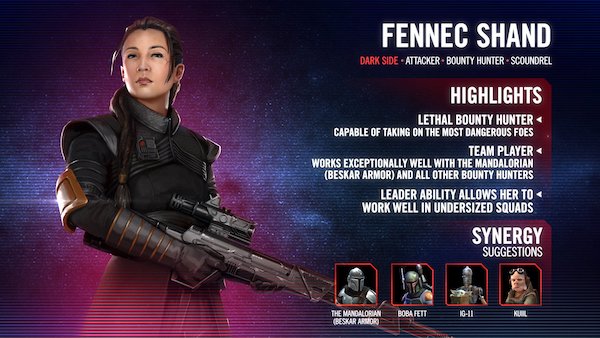 Bounty Hunter Fennec Shand is set to join the Holotables. EA Capital Games announced today that the Dark Side Bounty Hunter who first appeared in The Mandalorian Season 1 and also saw early time in the Bad Batch series would be the next addition to Star Wars Galaxy of Heroes. Here is a look at her complete kit of abilities:

ABILITIES:
Basic: CRUSHING STRIKE
FINAL TEXT: Deal Special damage to target enemy 5 times. If the target has no Protection, this ability deals 50% more damage. If it’s Fennec Shand’s turn and she has Seasoned Veteran, Fennec gains Offense Up for 1 turn.
Seasoned Veteran: Fennec can ignore Taunt and gains additional effects on her abilities

If Fennec has Seasoned Veteran, this attack can’t be Evaded and inflicts an additional stack of Armor Shred.

When Fennec Shand is in the Leader slot, and not the Ally slot, the following Contract is active:

Reward: All Bounty Hunter allies have their payouts activated, and all Bounty Hunter or Scoundrel allies gain 20% Defense and Overconfident until the end of battle, which can’t be copied, dispelled, or prevented.

Unique: MAKING AN IMPRESSION
FINAL TEXT: Fennec gains +10% Offense (stacking) until the end of encounter whenever she gains Tenacity Up. This bonus is doubled if The Mandalorian (Beskar Armor) is a living ally. When an ally loses Overconfident, Fennec gains 20% Turn Meter.

Unique: FENNEC SHAND’S PAYOUT
Whenever Fennec Shand receives a Reward from a Contract, she also gains the following Payout. (Contracts are granted by certain Bounty Hunter Leader Abilities.)
Payout: Fennec receives +15% Critical Chance, +25% Critical Damage and Seasoned Veteran until the end of the battle, which can’t be copied, dispelled, or prevented.