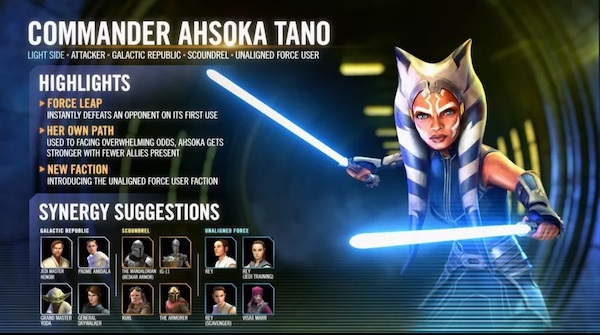 Welcome to the best mods for Commander Ahsoka Tano, the latest article in our series about the popular game Star Wars Galaxy of Heroes where we take a look at the top mods for SWGoH characters. While I do not claim to have all of the answers in this game, I do my research and have used every character I write about extensively. These are mod recommendations based on the character’s kit and actual gameplay to help you in your quest to dominate the Galaxy of Heroes holotables. 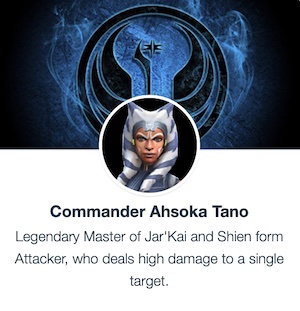 Today’s character to review mods for will be for Commander Ahsoka Tano, a character who was added through the Galactic Conquest game mode. This version of Ahsoka is a bit of an enhanced Darth Nihilus type of character and who complements Jedi Master Kenobi teams nicely. Let’s take a look at which mods will best enhance CAT’s kit for SWGoH success.

In-game Mod Recommendations: Speed & Health. In my own guild the recommendation was to use a Health and Speed set on her which aligns perfectly with the in-game mod recommendations set by the devs and with my evaluation of her kit before I finally unlocked CAT.