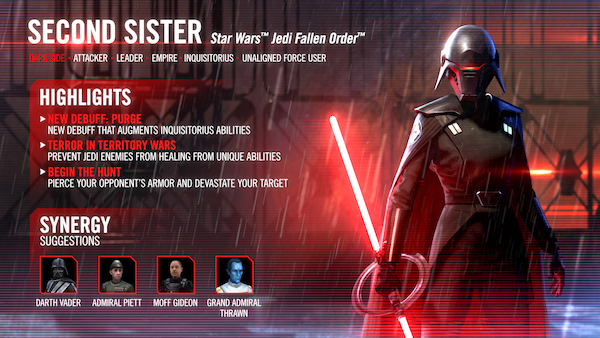 Welcome to the best mods for Second Sister, the latest article in our series about the popular game Star Wars Galaxy of Heroes where we take a look at the best mods for SWGoH characters. While I do not claim to have all of the answers in this game, I do my research and have used every character I write about extensively. These are mod recommendations based on the character’s kit and actual gameplay to help you in your quest to dominate the Galaxy of Heroes holotables. 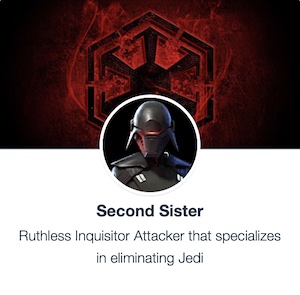 Today’s character to review mods for will be Second Sister. A member of the Inquisitorius faction, the Second Sister was the first Inquisitor added to SWGoH and originates from the Star Wars Jedi: Fallen Order and the Darth Vader comics that are also canon. In-game she is a Dark Side, Empire, Inquisitorius, Unaligned Force User and Attacker with a Leader ability. Let’s take a look at the best mods to maximize the Second Sister’s kit.

Main Focus: Speed is almost always the main focus of mods on SWGoH characters, and with Second Sister being an Attacker, Speed will play heavily into her kit. You’re going to want her attacking again and again while amassing stacks of the Purge debuff, and as Empire allies die around her she gets faster and stronger. A Speed set is definitely in play here as she has a base Speed of 186, good for the 10th highest non-Galactic Legend character’s base Speed in the game at the time of this original post. With this focus on Speed this ties directly into her next stats to focus on…

Additional Areas to Focus: Critical Damage, Critical Chance, Potency and Offense. Critical Damage is definite for your triangle mod’s main stat given Second Sister has +50% CD from her unique and gains additional CD based on in-battle situations. With CD comes Critical Chance, a stat you really need to hit hard given she is a dealer of Special Damage and has just 14.79% Special Critical Damage at Gear 13. Added Offense is wise with Attackers and if you use her as a Leader she gains and grants even more Offense, but I do not see an Offense set as a good choice for her. Finally Potency is essential with all members of the Inquisitorius faction to ensure they land the important debuffs, especially Purge, to help make this faction more effective.

In-game Mod Recommendations: Offense and Critical Chance. This one surprises me unless she is used primarily as a leader. That having been said, while we now have five members of the Inquisitorius faction in-game, I am sure modding strategies will emerge, especially when the Grand Inquisitor is added in-game.

The “ideal mod setup” can be interpreted a few different ways. If you target Speed, CD, CC, Offense and Potency through the mods you should be able to maximize her abilities utilizing Speed and CC sets. Here are my recommendations for the best mods for Second Sister: