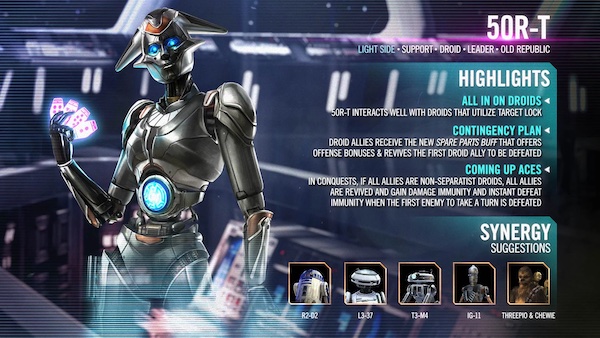 Welcome to the best mods for 50R-T, the latest article in our series about the popular game Star Wars Galaxy of Heroes where we take a look at the best mods for SWGoH characters. While I do not claim to have all of the answers in this game, I do my research and have used every toon I write about extensively. These are mod recommendations based on the character’s kit and actual gameplay to help you in your quest to dominate the Galaxy of Heroes holotables.

Today’s character to review mods for will be 50R-T, which I guess is supposed to look like “Sortie.” She is a fantastic Support character, enhancing Droid stats, applying Target Lock and Defense Down and granting Turn Meter to her teammates. Inspired by the Star Wars: The Old Republic concepts, Sortie thrives on high survivability stats and looks to be one of the best new characters added to SWGoH in 2022. Let’s take a look at the best mods for 50R-T to make her more effective on your roster.

Main Focus: Health. Sortie’s VIP buff not only impacts the character that gains the buff, but the positive gains are based on 50R-T’s own stats. With Health being important already, this makes a Health set(s) a must for this droid character. Add in the Leader ability where if all are Droid allies they all gain +30% Max Health and have a Protection Up parameter included, and Protection Up its based on Max Health in SWGoH.

Additional Areas to Focus: Protection, Defense, Potency, Tenacity and Speed. Protection goes hand-in-hand with Sortie’s need for Health above, especially with the VIP buff. Defense also plays an important role here with the Spare Parts leadership ability as Droid allies gain +35% Defense. Potency really benefits the Sabacc Shuffle special which can inflict Defense Down to all enemies and even Target Lock as well as removed Turn Meter. Tenacity will simply help keep red marks off of her head so that she does not get Ability Blocked, etc.

Now let us talk about Speed. She begins with a base Speed of 180, and as a Leader, Sortie grants Droid allies +35 Speed and, if all allies are Droids, she gains +40 Speed for herself. When used with BB-8, a classically very fast character with 300+ Speed, the Covert Data Transfer wiggle gives a random ally Secret Intel and BB-8 gains 8% Turn Meter from this move. With the +35 Speed added to BB-8 and the TM gain this looks to be an amazing start for any battle with them both included. 50R-T also can grant Speed Up to herself with her Tactical Advantage special, thus increasing the Speed even more. This discussion goes even deeper as indicated in AhnaldT101’s video on Sortie in SWGoH.

In-game Mod Recommendations: Critical Chance and Critical Damage. Wow, not what I was expecting. The testing in-game did not show this offensive potential when unlocking 50R-T as she hit like a pillow, and when you see how her survivability stats impact other Droids, this just was not on my radar. Even after reviewing I am not on the same page as the developers on this one, but we will see as more players get Sortie unlocked and Relics on her to see what she can really do.

The “ideal mod setup” can be interpreted a few different ways. If you target Speed, Potency and survivability stats like Health, Protection and Defense through the mods you should be able to maximize Sortie’s kit. Here are my recommendations for the best mods for 50R-T: