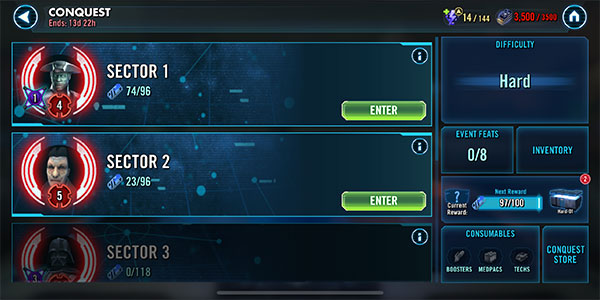 The 23rd edition of Conquest is here as we start to dip into the Holiday Season. This Conquest is the second in a trio of Conquest events, with a new Imperial ship as the prize at the end of Conquest 24 in January 2023 and Projecting Power datacrons to farm. As always, I wanted to take a moment to help the readers understand some of the Feats and/or simply better define them. While this is “common sense” (whatever that is anymore…) to some when they read the Feat requirements, as I have often said, we have a player base that is full of busy people and sometimes we fail to read through and review the details. Below are some quick tips to help you out in the November/December 2022 Conquest season (aka Conquest #23) in Star Wars Galaxy of Heroes where the Scythe is the prize in this the second of the three-part, three-month event.

Strategically, my plan is to hit each Conquest event early and often. I try to dominate the first 3-4 days, using all 50 crystal refreshes and maybe even a couple of 100 crystal refreshes as well, in an effort to ensure a life event will never derail my Red Crate prize, and this allows for much more time to farm Datacrons and Datacron materials in SWGoH to use in the GAC and Territory Wars.

Many of the Event Feats are self explanatory, like defeat 500 enemies or win 40 battles with a full squad of Jedi characters. A few to take note of:

Strategically, if you need to skip a Feat the Torment Feat is the one to bypass. It takes forever. Literally forever. Whoever had the idea to include this at CG is just trolling the fanbase.