Welcome to the newly updated Count Dooku mods guide, the latest article in our series about the popular game Star Wars Galaxy of Heroes where we take a look at the best mods for each SWGoH character. While I do not claim to have all of the answers in this game, I do my research and have used every toon I write about extensively. These are mod recommendations and they are certainly not the only option. However we look to help players maximize their characters in SWGoH and we are always open to feedback if you have a mod setup that works well of your gameplay. 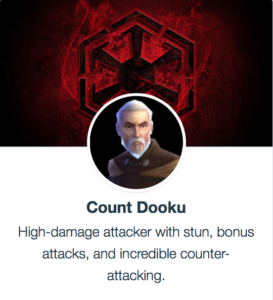 Count Dooku originally started as an important leader in the early days of Star Wars Galaxy of Heroes. Known as the Dodge META, Dooku’s pre-Omega material leadership at Level 7 granted all allies 15% Evasion and Offense Up whenever they evaded and attack making him and Old Ben Kenobi popular leaders. However the game evolved time and time again making the Dooku leadership irrelevant for advanced players of SWGoH. While Count Dooku made a bit of a comeback during the Darth Maul Sith META and on defense in Territory Wars under a Darth Traya lead for a time, Dooku once again faded away into the night. Fast forward to May 2019 where, at least on paper, the Nute Gunray and Count Dooku reworks appear to have bolstered both characters significantly within the Separatist faction. Let’s take a look at the best mods for Count Dooku.

Main Focus: Since Dooku has 75% base potency, which is enough to build from to effectively land debuffs, your main focus will be Speed. While Turn Meter gains will are present in two of his abilities, Master of Makashi and his unique, Flawless Riposte, his base Speed of 179 (with g12+, 167 without) is second best in the game at the time of this writing. Thus, a set of four Speed mods will add 10% meaning 16-18 Speed just for using that mod set. For the Aggressive Negotiations Padme Event I used Dooku early on with my Arena mods and easily had him over 300 speed.

Additional Areas to Focus: Offense, Critical Damage, Potency and Survivability. Dooku has low damage, but high crit chance, so take flat offense increases on secondaries wherever possible. Speed is great to have, but his high base speed, and TM gain on counter will already have his turn meter bar filling at a nice rate, letting you land the sweet stun/shock combo on Force Lightning often, so it’s not as important as getting his damage higher

The ideal mod setup for Count Dooku, in my opinion, is:

Hope you can answer for me. I noticed that count is level 75 in arena against me. All my characters are 85, by himself he beat 4 of mine with no problem. Every time he hit one of Mine he gained a lot of health back(health steal) is there a way to mod him to get health steal? Thanks

Agreed — DN lead omegad is 100% HS if he is Zetad it gets bumped up to 150% Health Steal. Also it prevents from crit hitting your team with the additional protection getting moved to Health. If your team is dependent to trigger on Crits against you like Maul lead or tanking with Gen Kenobi.. it won’t be triggered.

Hi, it would be awesome if there is a mention on the set bonuses for every character too

The set bonuses? As in restate what is in the game in terms of what you get from that set of mods?