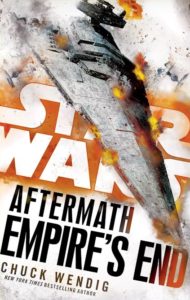 Aftermath: Empire’s End was released in February 2017 and written by Chuck Wendig, author of all three of the Star Wars Aftermath books. The story follows the main characters of the first two books in this trilogy – former Rebel pilot Norra Wexley, her son Temmin Wexley, bounty hunter Jas Emari, ex-Imperial Sinjir Rath Velus and former Rebel commando Jom Barrell – in another round of adventures.

Empire’s End focuses on the new “consultant” turned leader of the Empire, the move of the Empire’s forces to a noteworthy Star Wars planet, the politics of the New Republic, and the reasoning for the title – Empire’s End. The path and background of Gallius Rax, Ermitage Hux and other notable characters moving forward are also explored in greater detail.

My overall opinion of Aftermath: Empire’s End is positive. Having now read all three of the Aftermath books, the motivation for reading this one was the desire to not read spoilers online, thus I tried to read 2-3 chapters a day. It was a good read and overall I will give it a rating of 8 out of 10.