Welcome to another article in our series about Star Wars Galaxy of Heroes where we take a look at the best mods for SWGoH characters. While I do not claim to have all of the answers in this game, I do my research and have used every toon I write about extensively. These are mod recommendations based on the character’s kit and actual gameplay to help you in your quest to dominate the Galaxy of Heroes holotables. 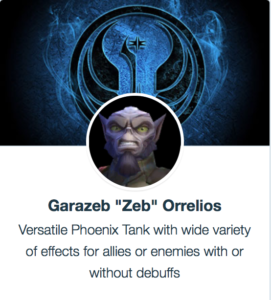 Today’s toon to review mods is Zeb Orrelios. Shortly after he was released in SWGoH, on March 23, 2017 I wrote in regards to mods, “potency and health stick out as the obvious choices.” A further analysis (below) shows these statistics to be top areas of focus from our in-depth review. Note that we recommend farming Phoenix characters early in our MSF 101 section, and I will address start-up mods for Zeb later in this article.

Main Focus: Survivability, specifically health and protection. Zeb’s unique, Shrug Off, specifically grants him, and all Phoenix allies under a Hera Syndulla lead, “Max protection equal to +40% of his max health.” Thus, if he has a higher Health number, he gains more Protection. In addition he regains 15% of his Protection at the start of every turn, 30% if he is debuffed. Thus, I would focus every stat possible on increasing his Health and Protection.

Additional Areas to Focus: Potency, Speed, Offense, Critical Chance & Critical Damage. Speed is a focus simply because you must have Speed on your characters to be effective, and Garazeb Orrelios is no different. While you want Zeb hitting often, using Ezra and Hera to call Zeb to assist can prove quite effective when Dazing and Stunning enemies. As a result, especially early in the game (level 50 after mods are added), Potency is a key stat to improve. It will help his basic and special attacks, both of which inflict debuffs on the enemy, so be sure to get the plus/cross mod with Potency as the primary stat and put it on Zeb. Critical Damage is helpful since all Phoenix allies share unique abilities through Hera Syndulla‘s leadership as Sabine Wren‘s unique boosts all Phoenix allies by +25% Critical Chance and +25% Critical Damage, and while a ton of CC is not necessary, boosting it is not a bad idea either. Finally, add some offense, especially early in the game, as Zeb is one of your attackers on the Phoenix team which is a bit weak on the offensive side of things.

In-game Mod Recommendations: Critical Damage & Health. While I cannot really disagree with the use of CD mods on Zeb, Potency is a more important stat to boost in my opinion for the reasons stated above. As you get later into the game, level 85 with higher gear levels, making Zeb hit harder and less potent can be a solid strategy.

I am recommending to go with 2 sets of 2 Health mods and a set of 2 Potency mods to gain as much as possible in those two areas. Note the triangle is a +36 CD primary. I am going this route because I have a very deep Health mod inventory and a potency triangle which also has health and protection secondaries AND +4.11% CC. Since all Phoenix allies have +25% CC and +25% CD under Hera’s lead, Zeb will be in great shape with Critical Damage without needing CD mods used on him. Thus, here is my preferred mod setup for Zeb:

I thought u were going to be doing MODS….I realize there’s too many toons, but u only did about 4. What’s up?

with his zeta would using critical damage mods to boost crit damage to 241%+ create a one hit kill opportunity for the lower health toons?
zeta:deal double damage to non debuffex toons plus 20% of their max health. with the right mods you could realistically hit for 60k

Interesting that you ask as I want to get the Zeta review for Zeb posted soon. HIs Zeta is awesome in terms of the damage it deals on the special attack, so yes, if you want a huge 1-hit toon in this group, a Zeta on Zeb plus CC/CD is the way to go IMO.

Either is fine, however the flat numbers (not percents) are favorable, especially to those who do not have a lot of Gear 12 characters.

[…] protection and defense are the key areas to focus, with health and protection as the main focus. Zeb‘s unique specifically deals with protection recovery each turn, which is passed to all […]