Welcome to another article in our series about Star Wars Galaxy of Heroes where we take a look at the best SWGoH mods for individual characters. While I do not claim to have all of the answers in this game, I do my research and have used every toon I write about extensively. 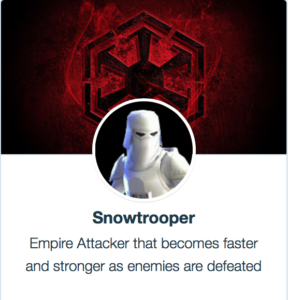 Today’s toon to review mods for will be the Snowtrooper. This Empire character is an “attacker that becomes faster and stronger as enemies are defeated.” Reworked and added as a “Imperial Trooper” in late April 2017, Snowtrooper has gone from an afterthought to a suddenly a very interesting character.

Main Focus: Speed is the main focus for Snowtrooper even though I am getting tired of recommending speed, speed, speed all the time. Add in a General Veers lead and you get a 20 speed boost, so start off strong and you’ll thank yourself during battle.

Additional Areas to Focus: Potency, Critical Chance, Critical Damage and survivability. Potency impacts Snowtrooper’s basic attack, Assault Shock Troops, as the goal is to inflict Ability Block on the enemies, however if you run Snowtrooper under a Emperor Palpatine lead, remember that you get a 32% Potency boost. Increasing his CC and CD are based on the rework as his special attack, Overwhelming Assault, with an Omega material now reads “Deal Physical damage to all enemies and gain Critical Damage Up for 2 turns. For each Critical Hit scored, reduce the cooldown of this ability by 1.” Thus, high CC can reduce the cooldown to allow the AoE attack to be used multiple times in a single battle. Add in the CD up buff and if you start with 180%-216% Crit Damage you could see some very impressive numbers. Note that under a General Veers lead Imperial Troopers get a 15% CC boost already. Finally, adding survivability (defense, health and protection) will help him stay alive longer so you can keep nailing your enemies with that AoE attack.

The rework of Snowtrooper has taken this character from a rather bland and weak character to one with enormous potential, especially under a Veers lead. Here is my ideal mod setup for Snowtrooper:

Should I Buy, SWGOH - Mods

SWGoH: Should I Buy a Mod Set Pack?