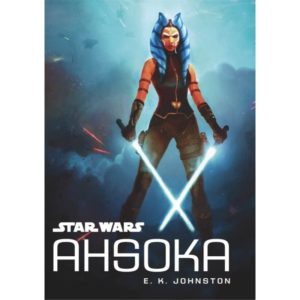 Ahsoka was released in October 2016, a few months after her character mysteriously disappeared into the Sith Temple on the Season 2 finale of Star Wars Rebels. Of course the Rebels series takes place around 4-5 years before the battle of Yavin, thus setting the Ahsoka novel 13 years prior.

Fans have long wondered what happened to Ahsoka after she left the Jedi Order near the end of the Clone Wars, and before she re-appeared as the mysterious Rebel operative Fulcrum in Rebels. Finally, her story will begin to be told. Following her experiences with the Jedi and the devastation of Order 66, Ahsoka is unsure she can be part of a larger whole ever again. But her desire to fight the evils of the Empire and protect those who need it will lead her right to Bail Organa, and the Rebel Alliance .

My overall opinion of Ahsoka is very positive. As a fan of the Rebels series and having watched every Clone Wars episode, I, too, was interested in hearing more about Ahsoka’s time after leaving the Jedi Order. While this fills in some of that gap it certainly leaves a lot of time unaccounted for. However, when the book arrived I read it immediately and reading 2-3 chapters a day during my busy schedule was something I looked forward to. It was a good read and overall I will give it a rating of 9 out of 10.