Today I’ll be looking at mods for Stormtrooper Han, for a long time, the only iteration of Han Solo available in the game. Equipped with an array of utility moves, as well as a stolen suit of stormtrooper armor, Stormtrooper Han can be an effective part of many teams. 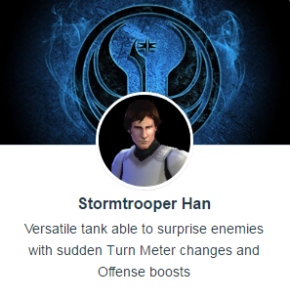 Main Focus: Stormtrooper Han, historically, has wanted speed above all else. His taunt, Draw Fire, instantly grants all team members 30% turn meter, and gives them another 20% each time he is damaged, so he was used to keep your damage dealers safe from the enemies initial attacks while feeding TM to his team. However, with the advent of protection ignoring attacks, and general increases in damage, his survivability desperately needs a boost. So your primary focus should be on Defense, Health and Protection, because otherwise, he’s going to die quickly. Given the August 2017 rework and added Zeta Ability adds a 5% Protection to StHan whenever he takes damage, focusing more on Protection is even more important than ever.

Additional Areas of Focus: Stormtrooper Han’s taunt, as stated before, grants allies TM on use and whenever he takes damage, so Speed is a must. The faster the taunt is up, the faster your start feeding turn meter to your team. Realistically, Speed is just as important as defense, health and protection – as soon as you can survive a few hits, Speed takes preference. Crit chance and crit damage are also desirable, especially if running under a Wedge leader. Potency will help his unique, Bluff, with Turn Meter removal at the start of his turns.

Territory Wars April 2019 Bonus: For April 2019 there will be two Territory Wars events with all five Han Solo characters in-game receiving “bonus abilities” in Star Wars Galaxy of Heroes. For StHan, he will have “+50% Max Protection, and other Han allies grant 10% Turn Meter to all other Han allies when damaged by an attack while Stormtrooper Han is active.” As a result, if you keep Stormtrooper Han alive he is going to give out 10% TM every time one of the other Hans gets hit from an attack. For these specific Territory Wars, I would recommend additional survivability, especially Protection, to up that stat and make him harder to kill.

In-game Mod Recommendations: Speed & Potency. Given Stormtrooper Han is a taunting tank, I do not feel that a set of 4 Speed mods with a set of 2 Potency mods is the correct direction to go in. My recommendation would be to instead get at least one Defense set on StHan with high Speed secondaries, especially after Mods 2.0 given Defense mods are much stronger now. Honestly, the best suggestion for this character may be to take your best (fastest) Defense mods and put them all on Stormtrooper Han and watch him eat up the hits and pass out the TM.

All things considered, I believe the best mod setup for Stormtrooper Han is;

Hey great work you have done!!. But I have a doubt, I understand that speed is important, but doesnt SHan need potency for his Bluff to work? or as the chance is only 25% it is no worth on spending Potency here and its best to go with CC and CD like you mention?
Thank!!

Again thanks for the info. Was a great help to make Han more effective.