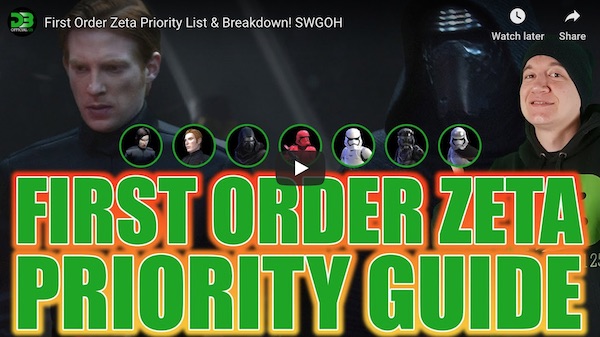 What’s up people? It’s DB and I’m back today with a full Zeta priority breakdown for the First Order. Read the levels of priority below or scroll to the bottom to check out my video on how to best prioritize your Zetas for the First Order faction in SWGoH. As always, be sure to subscribe to the DBofficial125 YouTube channel where I cover Star Wars Galaxy of Heroes, Knights of the Old Republic and more, and like the video embedded below. 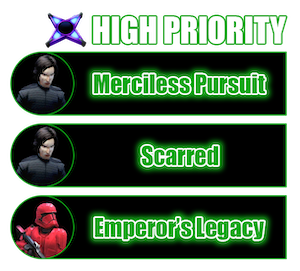 Kylo Ren Unmasked (Merciless Pursuit) – Lots of boosts from this essential Zeta. More Critical Damage, Speed and Turn Meter as well as 5% Health & Protection recovery whenever a First Order ally gains a status effect. Even now, KRU is the primary leader for the team and seemingly has more overall uses than Hux. Even if you opt to use Hux, having this as an option will greatly increase what you can do with the faction.

Kylo Ren Unmasked (Scarred) – The key here is that it adds Pre-Taunt, very useful even under Hux lead to protect him from being shutdown or killed too quickly. It also doubles Kylo’s Counter chance to 100% while taunting. The counters will spread Tenacity Up making it easy to regain taunt by using your Basic attack on Kylo’s own turn. If you use a Hux lead most then I’d recommend this as the very first Zeta you apply to the First Order faction in an effort to help protect him.

Sith Trooper (Emperor’s Legacy) – An absolutely amazing Zeta, particularly against the AI. Whenever a First Order or Sith ally is defeated, Sith Trooper has the cooldown of his AoE special, Vengeant Blast, reset. It also grants him Advantage and a Bonus Turn, meaning you can use it right away and are guaranteed a Critical Hit. This a big deal because under a First Order or Sith lead as he gains 50% Critical Damage and an extra 50% Damage for each currently defeated ally of those factions. With the right gear and mods on Sith Trooper, it can quite literally turn the battle in a complete 180 from a loss to a win. 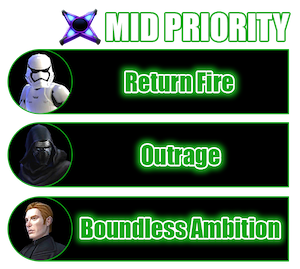 First Order Stormtrooper (Return Fire) – One of the original must-have zetas for this faction, Return Fire gives a 50% chance for an ally to assist FOST’s turns, while also granting First Order allies Advantage for 2 turns. You can really ramp up your damage in raid runs and standard battles by simply applying this and pairing him with First Order Executioner and/or Sith Trooper.

Kylo Ren (Outrage) – An extra 15% Damage to the move as well as a huge Protection recovery that is equal to the damage dealt. This is a big deal as saving it until Kylo is below full Health will increase its damage by 75%. Add in the Advantage that the First Order spreads and you have a huge one-shot damage move that’ll fully heal Kylo’s Protection. While the AI often wastes this on defence, using it correctly on offense will really speed up battles.

General Hux (Boundless Ambition) – As long as you can protect General Hux this Zeta is fantastic. It prevents the enemy from gaining bonus Turn Meter while Hux has Advantage, and he starts with it for 2 turns anyway. As a unique this is active even under a Kylo lead, but shines best when paired with his own leadership. Hux’s leadership grants him Dominance which’ll also prevent the enemy from countering First Order teams until Hux is hit by a Critical Hit. No bonus TM or counter will drastically weaken many teams, but he is very soft so Hux will need help from Defence mods and some Critical Avoidance. A Zeta on Kylo Unmasked’s Scarred to pre-taunt will go a long way to getting value from this Zeta. 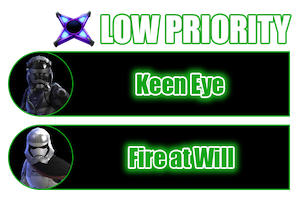 First Order Tie Pilot (Keen Eye) – A nice Zeta that ramps up what’s best about the FOTP, more Critical Chance and Critical Damage. He’ll also get a 70% chance to gain Foresight whenever he loses Advantage to help offset how squishy he is. The problem is that First Order has bigger damage dealers with better health pools than FOTP. Most people developed FOTP for the Target Lock fleet meta in the past, but now the ship lacks any serious use. I suspect until a First Order capital ship arrives, the First Order Tie Pilot will be nothing but a backup option and therefore a Zeta investment isn’t optimal.

Captain Phasma (Fire at Will) – This triples the assist chance for First Order allies to 60% whenever an ally attacks. It also grants Advantage for 2 turns at the start of the battle, with 20% Potency, and prevents them being critically hit while they have Advantage. The problem is that a Captain Phasma lead just isn’t that good against the modern power curve. It lacks survivability as characters have very high Offense, negating the need for a Critical hit anyway. While the lead can be fun to use, especially early in the game, it is rarely considered when Kylo Unmasked and General Hux are options.