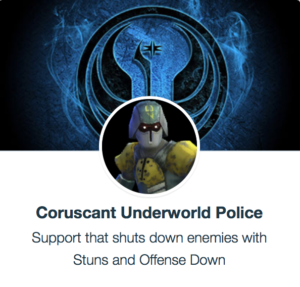 Today’s toon to review mods for is Coruscant Underworld Police. Considered one of the worst toons in SWGoH, CUP is a character who came up in our Guild’s chat discussing roster depth. While he was a decent character to have early in the game because he can stun enemies with his basic attack, I personally have ignored him despite being an easy farm in the Squad Arena Store.

Main Focus: Speed. As always, in order to be effective in this game and use the skills he has, CUP needs Speed just like almost everyone else in the game.

Additional Areas to Focus: Potency and survivability. If Speed is the first focus, Potency has to be a close second. All of the benefits of using Coruscant Underworld Police come from a need for Potency. His basic, Non-Lethal Takedown, has a 50% chance to stun the target and his special, Non-Lethal Crowd Control, has a 70% chance to inflict defense down – all if you have the right stats after mods. While’s CUP’s unique, Non-Lethal Specialist, does grant him 30% potency at level 8, I still recommend keeping his Potency high – 60% or higher – to ensure he is as effective as he can be. Any other focuses should be on health, protection and defense to keep CUP alive and maybe a little offense to have him hit a bit harder.

I recommend the use of Potency mods on CUP with as much Speed as possible. Thus, here is my recommended approach for mods on Coruscant Underworld Police: