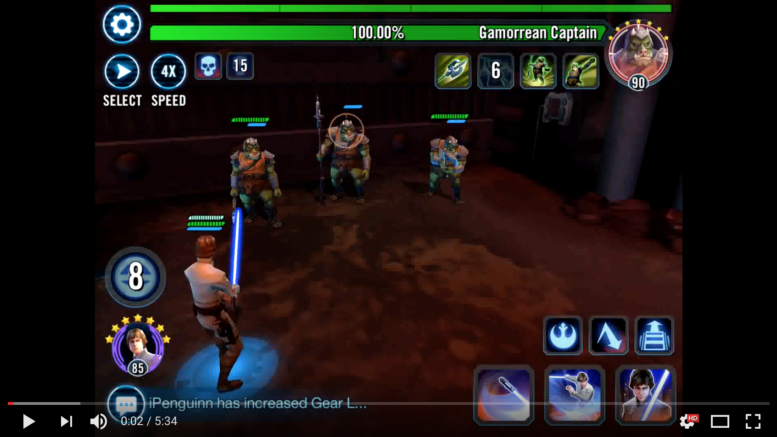 This week we are going to take a look at a topic that has been a hot button in my own guild lately – The Rancor Raid.

I still remember when this launched – it was a very exciting challenge and wow did we ever have fun taking it down. Eventually we found some help and reached the pinnacle – we could beat the heroic raid. Within a month or two we were beating it without help, and a couple of months after that and we were clearing it with half the guild not bothering to do more than register a zero. 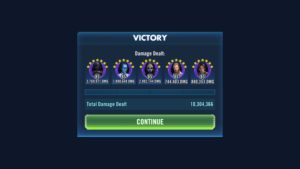 Then people started to solo the raid, mods made that possible, and zeta abilities and a broken Vader glitch made it even easier. Most recently now we saw the introduction of Commander Luke Skywalker, and with that came the first ever true solo of the Rancor raid, one single character by himself can defeat the entire raid. Now that is what I call a Solo.

I get it, for many newer guilds out there these last few paragraphs are a dream or fantasy, it seems like it will take forever for you to see these things for yourself, but it will come and at that point you will be very happy for the changes I am proposing.

It is time to add a Legendary Rancor Raid.

Quite simply I propose that an 8th tier be added, in this tier the health will be double, and turn meter reduction effects will be reduced by half. This should result in guilds requiring more than one player to complete the raid and inject a little challenge back into the Rancor raid.

Of course to make up for this the rewards would need to be changed, and my proposal here is that we take a page from the upcoming territory battles, everyone gets the same rewards as follows: 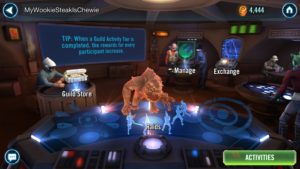 The cost to enter the raid will be set at 90,000 Rancor Raid tickets. But what will the salvage and fully crafted gear be? That is where the real rewards are. You will receive either a fully crafted raid gear piece:

Or you will receive 25 salvage for one of the above raid gear items. Then you will also receive either a full gear piece or 25 salvage form the following list, with the guarantee that one of the pull will be a full piece and the other will be 25 salvage.

I know that this is a bit of a wish list, but for most of the end game players in the community this is what we really need to see to START to address the gear issues in the game. I hope Territory Battles help the gear grind but having seen the videos it is really shaping up to be more of the same. We have a great new store where we can in theory buy things like Stun Cuffs and Stun Guns, but the other items are so much more valuable that we would be foolish to spend currency on things like Stun Cuffs.

Now while all of this addresses the lack of interest in the Rancor Raid, and some of the gear issues in the game, there is one item still outstanding.

Most guilds run a registration system for raids so that everyone can get some rewards, but even still there are always some who want to participate in a Raid but are unable to, perhaps it is dinner time, or arena payout time, or you are taking the kids to swimming lessons or any number of other things. It is about time this issue got addressed.
When a guild has cleared a heroic raid for the first time the guild leader unlocks a new mode for a raid. This mode allows two things.

Combined, the effect of these two changes are as follows:

Each player can enter any phase they wish, when they enter the phase all progress is recorded in that phase for that player only, they will be allowed to enter each phase only once during the 24 hour Zero Damage Recorded phase, but they may enter all four phases. Any damage done during this phase is held on the servers until the 24 hour phase is over. Once the 24 hour phase has ended all the damage done by all the players is applied instantly. This may result in significant overkill to some phases, and it may leave other phases still standing, but from this point on the Raid will proceed as per normal – people can enter the earliest phase remaining and attack as per usual. When they clear the open phase they will proceed to the next phase with damage remaining until the entire Raid is complete. If a guild manages their resources poorly it is possible that they will overkill one phase to such a degree that they are unable to finish off a different phase. But in a practical sense by limiting each phase to one attack per player this is rather unlikely.

The end result of this mode is twofold.

Overall I see this is a win-win for everyone involved, it would make a huge quality of life improvement, while also allowing the ever important play time metric to increase for those that want more gameplay.

I hope you have enjoyed this week’s edition, and please join me next week when I will tackle a new topic.