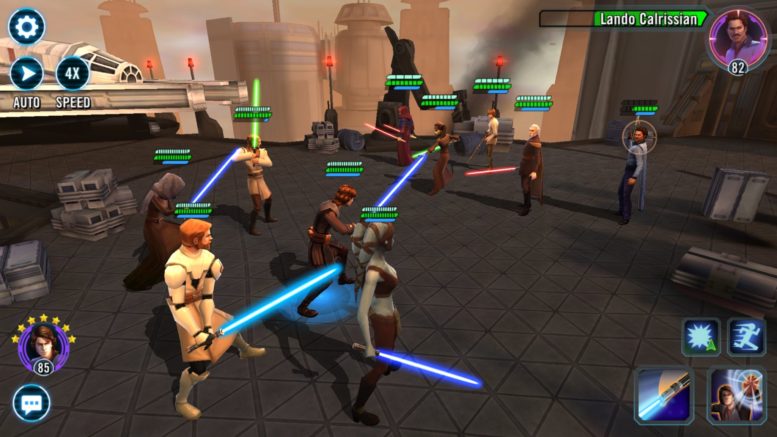 Welcome to the Jedi Knight Anakin mods guide, the latest article in our series about the popular game Star Wars Galaxy of Heroes where we take a look at the best mods for specific SWGoH characters. While I do not claim to have all of the answers in this game, I do my research and have used every toon I write about extensively. 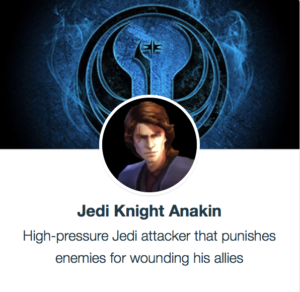 Today’s toon to review mods for is (spoiler alert) the boy turned Jedi Padawan, then Jedi Knight, then finally Sith Lord, Anakin Skywalker. For the purpose of Star Wars Galaxy of Heroes, Jedi Knight Anakin is in his pre-Darth Vader form and true to the movies, he began risky and full of offensive firepower. JKA (see: SWGoH Acronyms), along with Ahsoka Tano and General Kenobi, received a rework in April 2019 which saw a stronger synergy formed for the three Clone Wars Jedi, so we have updated this article accordingly.

Main Focus: Like almost everyone in the game, Speed if the key to making Jedi Knight Anakin as effective as possible. His offensive output is strong, and while he used to gain Turn Meter when allies fell below 50% Health or when they were defeated, the rework saw that changed to JKA now taking a bonus turn instead. A big difference if you follow the intricate details of SWGoH gameplay. My recommendation is to get JKA as fast as possible so he can keep attacking.

Additional Areas to Focus: Potency, Critical Chance, Critical Damage, Offense and Survivability. Potency is key to landing the Healing and Buff Immunity debuffs from his basic, Deft Bladework, which is easily overlooked in his kit. Offense and Critical Chance are obvious choices given he is a strong attacker, and Overpowering Assault grants allies Offense Up and Critical Chance Up when used. Anyone with high CC is a good candidate for a triangle with a Critical Damage focus, so do your best to enhance this one. Any additional Survivability would be beneficial to add to JKA’s already strong stats, but Offense is where you want to focus since Protection Up is a stat based on Max Health in Galaxy of Heroes.

Jedi Knight Anakin can be modded in a couple of different ways, but building on his offense is the key whether you use CC/CD or Offense mods. I prefer the use of 4 Offense mods for JKA because so many other characters are so reliant on CC/CD mods:

Under areas to focus, Deft Bladework is misspelled Deft Beadwork. Just wanted to be of help. Love your articles, they are very helpful!

Thanks – the dang auto-correct gets me all the time. Always messes up “cooldowns” too – will fix immediately.