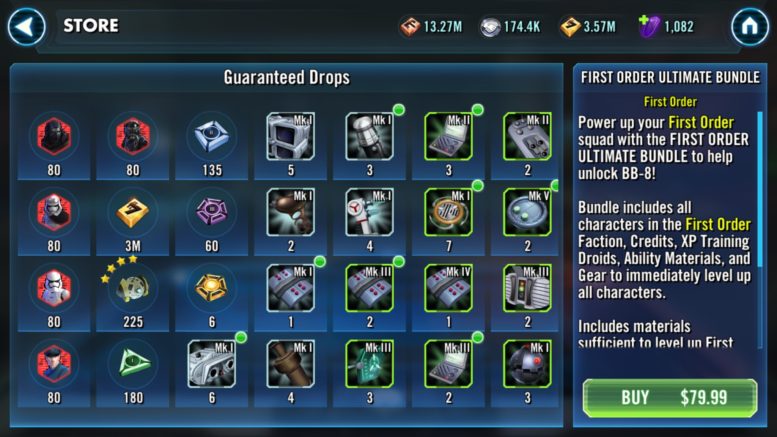 The latest in our SWGoH Should I Buy series focuses on the First Order Ultimate Bundle.

The hearty, fun droid BB-8 is coming to SWGoH through his own Legendary Event and will require First Order characters to unlock him.

The First Order Ultimate Bundle is available for direct purchase, rather than through crystals, and is $79.99 USD. Aside from ability mats, training droids, and credits used to bring five different characters to Level 50, Gear 5, and Ability Level 4, the bundle offers 80 shards of the following characters: Captain Phasma, Kylo Ren, First Order TIE Pilot, First Order Officer, and First Order Stormtrooper. 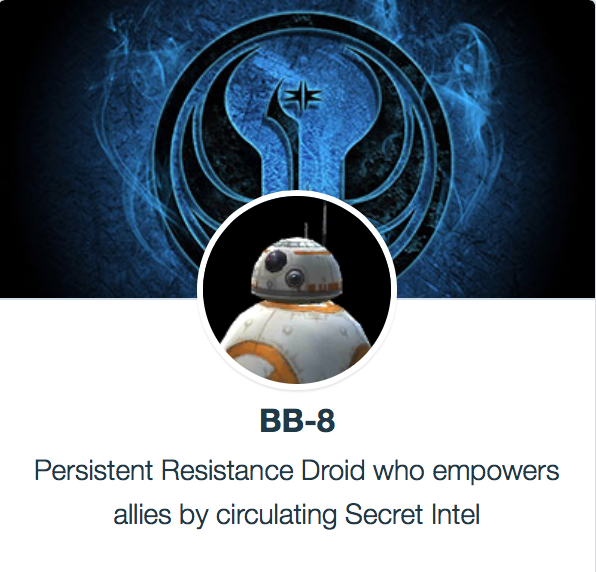 The bundle has a lot of great potential.

With BB-8’s Legendary Event requiring the only five current First Order characters available in the game, this bundle offers a great way to get a head start on a difficult faction to farm. The bundle provides enough shards to take each of the five characters straight to 4*.

Accompanying this bundle is also a First Order Faction Pack which allows players to try and pull anywhere from 10-330 shards at 699 crystals at a time. The FO Ultimate Bundle combined with some luck with the Faction Pack could help a player, who may not even have any First Order characters unlocked, acquire enough characters to unlock BB-8 at least at 5*.

The Sort of Bad

Generally speaking, however, the pack is a bit on the skimpy side.

The gear offered to take a character up to Gear 5 is very easy to farm, even for low level players, and most of the players who would find interest in this bundle, will likely have stock piles of all the gear readily available. 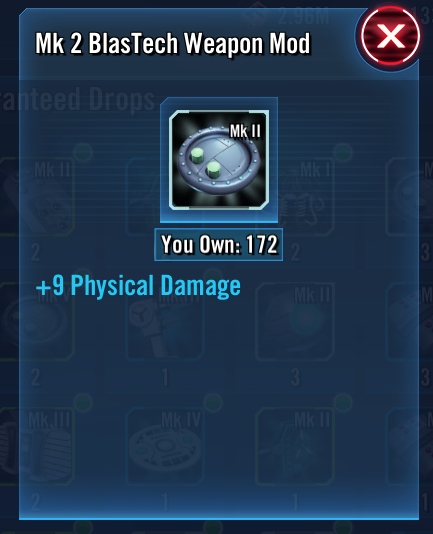 The credits provided are just enough to unlock each of the characters and, as promised within the bundle text, also take all five characters to Level 50, Gear 5, an Ability Level 4. While the Ability Mats are a nice bonus (one tends to run short of Purple and Omega mats in the days of Zeta characters), the credits offered don’t give a lot of wiggle room to do much else.

From experience with previous Legendary Events, Level 50 Gear 5 characters will not be sufficient to unlock a legendary character, even at 5*. Players will need at least another 1.25 mil credits just to take these characters to 5*. An additional ~6.1 mil credits (~1.218 x 5) would be necessary to bring the characters from Level 50 to 65 (a bare minimum for success in a legendary event), and further credits and more difficult gear are necessary to increase gear to Gear 7+ and abilities to Ability Level 6+.

All this notwithstanding, the 80 shards provided per character are a major bonus for the bundle. Players who have any of these characters unlocked already can ensure that they are on a good path to have the relevant shards necessary to unlock BB-8 at 5* or higher.

Despite the fact that the First Order Ultimate Bundle offers a quick solution for players seeking to get BB-8, who have not had either time or foresight enough to farm First Order, the bundle does lose a fair amount of shine when compared with previous bundles preceding Legendary Events.

The Prepare for Battle Bundle ($59.99 USD), which was available during the first few weeks of Territory Battles, offered 55 shards each of Hoth Rebel Soldier and Rebel Scout, and also full pieces of hard to acquire gear, relevant for taking characters from Gear 11 to Gear 12.

The Bundle came with the following gear:

The bundle also came with 4 million credits and 6 Omega mats.

The total worth of all the gear provided in the Prepare for Battle Bundle comes to 15,400 crystals. To put this in perspective, a Vault of Crystals is $100 USD and offers 15,710 crystals. The Prepare for Battle Bundle offered nearly $100 USD worth of hard to farm gear in addition to 4 million crystals, 6 Omega mats, and enough shards to unlock both Hoth Rebel Scout and Soldier! 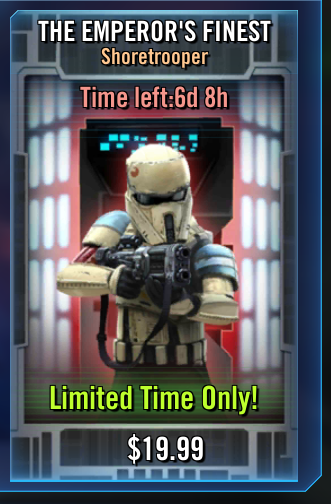 Additionally, the characters offered in the bundle did not need to be highly geared or starred. Hoth Rebel Soldier was only needed at 3* for the first Phase where he appears in Territory Battles and, while Hoth Rebel Scout needed to be 4* for his first required use in Territory Battles, he was an easy farm through the Cantina Store and was also featured in previous Faction Packs and Bundles. Both characters are required in their respective Combat Missions, but a strong player could complete the missions even with both characters as low as Gear 6. The 55 shards offered are more than enough to supply a player with what was actually needed for the respective event.

To compare with the First Order Ultimate Bundle, all five First Order characters need to be at 5* and a minimum of Gear 7 to help a player unlock BB-8. The First Order Bundle leaves a player with a lot of farming of both shards and gear in order to fully prepare for BB-8’s event. While the Prepare for Battle bundle offered ready-to-go characters along with gear that could be used across a player’s roster for $59.99, the First Order bundle costs $20 USD more and offers a good deal less.

To make matters even murkier, unlike with previous legendary events, no separate character bundles have been made available alongside the larger bundle and the faction pack. For R2-D2’s Legendary Event, we had the Emperor’s Finest Bundles that gave 80 shards separately for six different characters at $19.99 each, in addition to a Power Up Bundle that gave a set of shards similar to the Ultimate Bundle. For the introduction of Commander Luke Skywalker, we were offered individual packs of each of the four other characters required to attain him as well. At $19.99, players could select just the characters they needed, and often times, this was just a single character’s bundle.

If a player is like me, and has been farming First Order for some time just to be able to attain the Offense Mod Challenge achievement, then their First Order roster may like this:

All that is needed to ensure BB-8 is unlocked at 5* are the remaining shards for First Order Stormtrooper, but my options are now to either try my luck at the Faction Pack (where I already have 3 of 5 characters at 7*), “panic-farm” the toon’s three Hard Nodes, or attempt to justify spending $79.99 just so that I can attain the last few shards needed. 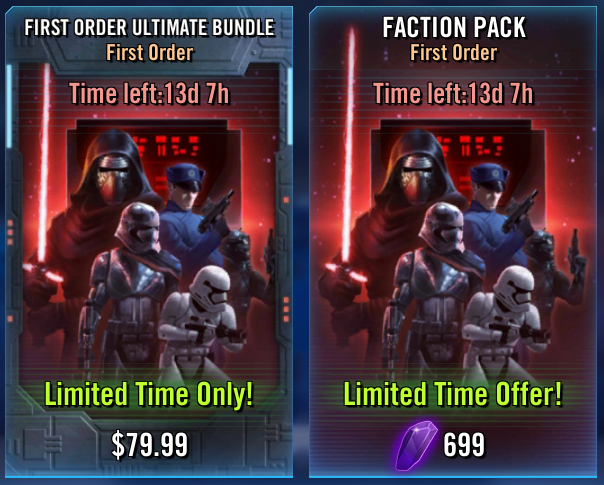 The $79.99 price tag on this faction pack makes it among one of the highest introduced in the game, but it is very likely all that stands within a player’s path of attaining a truly great character and future characters. While it is more expensive than previous packs and does not offer the plethora of gear or credits as other bundles, the First Order Bundle could mean the difference between remaining relevant in the Arena or languishing several tiers “higher” than accustomed. Also, unlike the Faction Packs, there is no gamble on the shards received; the shards and gear are purchased directly with no RNG or luck involved.

With all that said, Legendary Events always return and missing one character from a roster does not necessarily mean that a savvy player cannot still remain competitive. There is also the possibility that the developers could still release cheaper individual character bundles as we near the start of BB-8’s event. Players could also spend the same funds from this bundle directly on crystals and get to work farming those last needed shards.