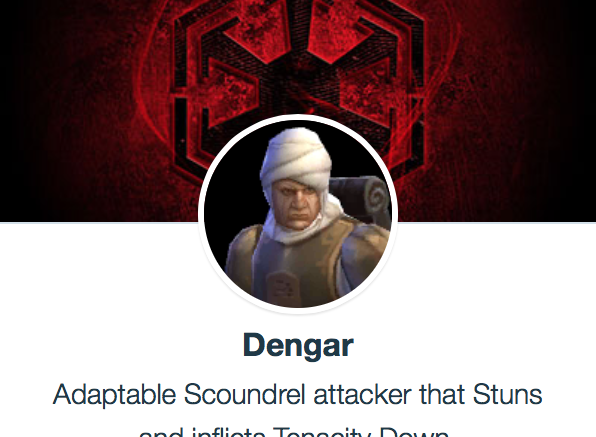 Welcome to the latest article in a series about Star Wars Galaxy of Heroes where we take a look at the best mods for individual characters. As your guest reviewer I cannot claim to have definitive answers but all toons I’ve written guides for have been maxed out, modded and tested to the best of my abilities. 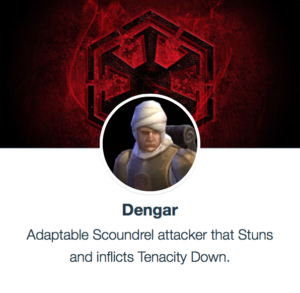 Today’s toon to review mods for is one of the sinister six bounty hunters, Dengar. This Scoundrel is worth farming in the Guild Store as he’s useful for credit heists, the Pit Raid and no doubt Dark Side Territory Battles. A look at his kit shows that his basic attack, TARGET SPOTTED, deals physical damage and has a 60% chance to call an assist if the enemy is debuffed. If Dengar calls on a fellow Scoundrel it’s a guaranteed crit assist. His first special, BLAST & SMASH, is again physical damage with a 75% chance to inflict Speed Down plus if the target has more than 50% TM they’re Stunned for 1 turn. His second special is MINI-MINE MAYHEM, an AoE attack without much punch but the ability to inflict stacking debuffs of Tenacity Down, DoT and 50% TM, dependant on Crit hits AND Thermal Detonators. Finally, his unique, GRIZZLED VETERAN, works in 3 ways. If he suffers a crit hit he’ll gain Stealth for 2 turns, if an enemy evades his attack Dengar gains 60% TM plus if he suffers a debuff he’ll gain tenacity up for 2 turns.

Note that the mods below vary on how you plan to use Dengar, so if your focus is Phase 3 of the Heroic Sith Raid please check out our in-depth look at the characters and the mods needed.

Main Focus: Critical Chance & Potency. Dengar has a pretty decent base Potency of over 50% when max geared so I get my extra Potency from a Multiplexer mod and decent secondries to push it even higher. Since both special attacks rely on Potency to inflict debuffs (negative status effects in SWGoH), be sure to make this a major focus. As ever you’ll want to look for Speed secondries but he doesn’t need to go first so I’ve opted for good Critical Chance secondries where possible. Clever targeting with his Speed Down/Stun is useful but his killer move is his AoE, Mini-Mine Mayhem. Three or more cries from this attack will reduce the enemy’s Turn Meter by 50% which can be super effective on a AoE attack.

Additional Areas to Focus: Speed, Critical Damage and survivability. Speed is important as Dengar is very slow with a max Speed of 121 at Gear 12+, so boost this when you can. Because you will already be working on Dengar’s CC, raising his Critical Damage number is a good move to make sure he hits harder with those crits. Survivability, Defense, Health & Protection, will bolster his survival, and Dengar is quite squishy.

In-game Mod Recommendations: Critical Chance & Critical Damage. Personally, I see Potency as a more important focus than CD for Dengar, but this is not a recommendation I will argue against vehemently.

I recommend the use of two Critical Chance sets and a Health set on Dengar, however in-game it recommends CC & CD mods. Here is what I would recommend (although the set bonuses can be gained from any combination of placements as long as 2 are health set & 4 are crit chance set):

[…] Hunter rework, Dengar is a solid character with a kit that can be very effective when using the right mods for Dengar to maximize his abilities. Be sure to look to Gaming-fans.com for our Best Mods guides for 150+ […]