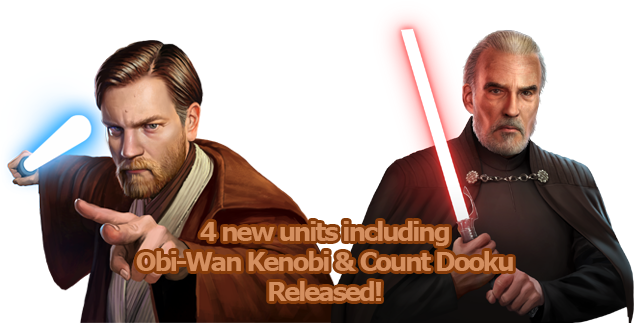 The latest Star Wars Force Arena update is here, as despite being 5 weeks after the release of The Last Jedi, the team at Netmarble Games who run Force Arena has added two popular prequel characters – Obi-Wan Kenobi & Count Dooku. “This update will include a whole host of cards and a fair amount of quality of life changes to improve the overall experience of Star Wars™: Force Arena,” according to the SWFA community site. Both character legendary cards and their corresponding unique card can be found upon reaching Tier 7 (Bronzium) in the Light Side (Kenobi) or Dark Side (Dooku).

Obi-Wan Kenobi is paired with CC-2224, also known as ‘Commander Cody’, described as “an outstanding commander of the Republic Army. A natural strategist, he is incredibly useful against enemy fortifications or vehicles by calling in powerful Rocket Clone Troopers. His excellent judgement and loyalty will bring victory to the Light Side.”

Count Dooku is paired with the Vulture Droid, described as “a powerful tool in the Separatist arsenal. The Vulture Droid is controlled by a central computer, and after its bombing run, will transform into a walking machine capable of inflicting massive damage to the Galactic Republic.”

In-game changes and balancing impacting Princess Leia, the Unstable GNK Droid, The Grand Inquisitor and more are all listed on the SWFA Community site.