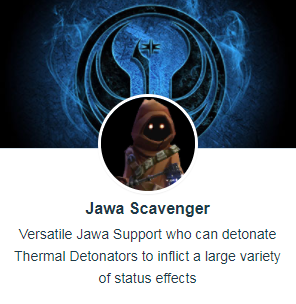 Today’s entry into our Best Mods series will be looking at the best mods for Jawa Scavenger. While I don’t use this character often (and neither does anyone else), I’ve still used him enough to test different mod load outs. 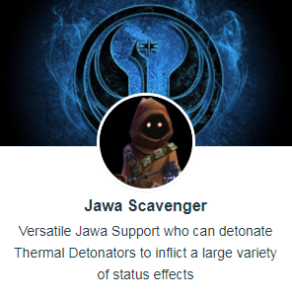 Jawa Scavenger is one of the best examples of a pure support character there is, with mediocre stats all round. But, what he lacks in actual damage and survivability, he makes up for with buffs, debuffs, and incidental damage when part of a full Jawa team. With a total of four possible debuffs, two possible buffs, and a 50% chance to apply a thermal detonator on any enemy who damages a Jawa ally, Jawa Scavenger one of the most important Jawas to mod properly, even if it’s only for mod challenges.

Main Focus: Being able to detonate thermal detonators before the enemy has a chance to cleanse is important, so, Speed should be your first focus. Potency is also very important, and should be your second focus. Jawa Scavenger can inflict a variety of debuffs, with Healing Immunity being the most notable. So Potency will help the debuffs stick, and speed will give you more chances to get them on the enemy.

Additional Areas to Focus: Jawa Scavenger’s first unique, Line in the Sand, gives him stealth for three turns each time he lands a Critical hit, so increasing Crit Chance is a great way to boost his survivability. Otherwise, Health and Protection to keep him alive is a must to maximize your teams damage output.

The following mod setup will need to be tweaked depending on which leader is being used, and gear level, to prevent over-stacking Crit Chance and/or Potency. That said, the general mods for Jawa Scavenger should be;