Speed. The ultimate goal of mod farming, and the bane of players everywhere.  There’s nothing more frustrating than losing a fight because of a few speed points. Nothing except trying to close the gap, that is. So let’s look at some of the numbers behind speed mods, the white whale of SW:GOH. 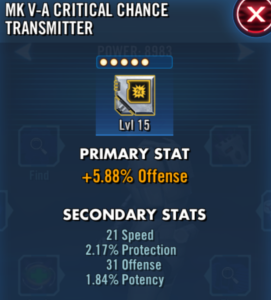 This guide is based off my own experience farming for mods, which I have had great success with. My own highest (secondary) speed mod is +21, which is fantastic. It’s not the highest possible, but still higher than most. Your results my vary, but this is how I acquired almost all of my good speed mods.

The highest speed stat that can be found on an unleveled, five dot mod is 5, and the most it can be upgraded each level is 6, giving us a theoretical maximum of +11 speed for green mods, +17 for blue, +23 for purple mods, and +29 for golden ones. Grey mods can have +5 speed, but because they don’t increase, we’re not looking at them.

However, the difference between theoretical maximum and a more realistic maximum is massive. There are multiple places you rely on RNG – getting a useful mod with a speed secondary – as well as the initial amount of speed on it, how many times speed is upgraded, and how much each upgrade adds. So increasing the chance of getting a good speed mod is important.

In the past, the mod store was the most consistent source of promising mods. However, the introduction of Territory Wars and Territory Battles has made credits more valuable, and the drop rate from challenges has been increased to 100%. Because of this, buying energy refreshes is a much more efficient way to farm mods than it used to be, since you are guaranteed 7 drops for a 100 crystal investment. This is especially true if you sell unwanted mods for extra credits.

The odds of obtaining a promising mod are still on the low side. Six slots you could have drop. Five qualities you could get. Three tiers the mod could be. Up to seven primaries, only one that’s really useful, and twelve secondary stats to choose from. If you get speed as a secondary stat, it’s initial value is between +3 and +5. That’s a lot of variables you need to line up for a great mod. However, a large enough sample size will reduce the effects of RNG, and the volume of mods possible from energy refreshes will help you get there faster. Another way to think about it is, one refresh gives you 7 chances to get lucky.

Getting speed to upgrade

So now there’s only two variables – whether your speed is upgraded, and how much it increases by. The odds of having speed increase vary depending on quality.

As you can see in the above table, lower quality mods have a lower potential maximum speed 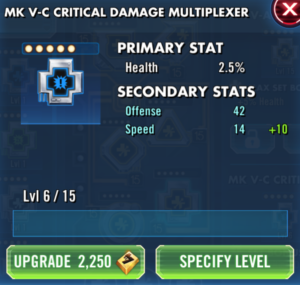 , but a similar chance to upgrade the speed stat. This means that, for example, a blue mod is slightly more likely to upgrade speed twice when compared to a gold mod. So unless you’re looking for extremely high end mods, lower quality mods are still viable.

How High Will It Go?

Even if you’re lucky enough to have speed upgrade each time, you could still end up with a low/mid tier mod. The increase to speed can range from +3 to +6, giving a 25% chance of getting a particular number. Using this, we can check how likely it is that we’ll get the maximum possible speed for each mod.

So there’s only a 0.0015% chance to get a perfect speed mod. That’s around a 1 in 66,667 of getting one, starting with an ideal mod. Let’s face it, it’s not realistic. It’s winning the RNG lottery. The chance of getting one is so low that it’s only theoretically possible – based off mods synced to swgoh.gg, no one has one. In fact, only a single +28 speed mod is recorded, out of over 10 million synced mods, so it’s highly unlikely you’ll get that perfect mod, or even come close to one.

The Key To High Speed Secondaries

Because the chances of ending up with a +29 speed mod is so small, you’re almost as well of levelling a lower quality mod with high potential.

The key to obtaining high speed mods, in a nutshell, is to farm mods from challenges and level them, regardless of quality, as long as the desired speed is possible.

Edited for clarity and to fix probability issues pointed out by multiple players on the official forums and reddit.

Special thanks to Vectron formerly of DotE for the title!

14 Comments on "SWGoH: Speed Kills – How to Find the Best Speed Mods"