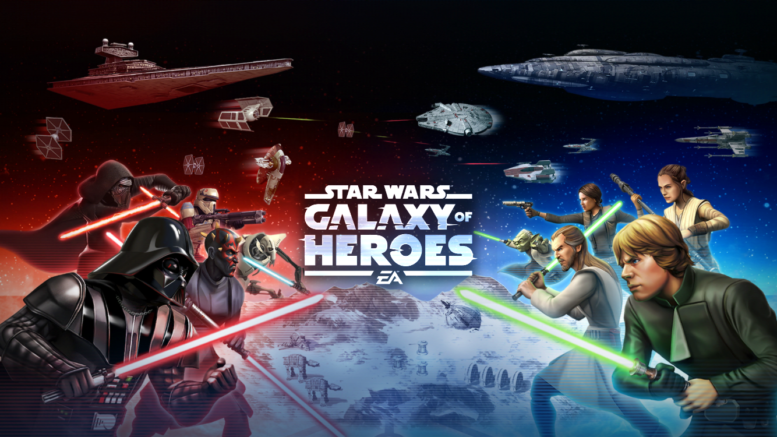 Star Wars Galaxy of Heroes continues to play off the new content provided by SOLO: A Star Wars Story with two new characters and a new ship. The kits for Young Lando Calrissian, L3-37 and Lando’s Millennium Falcon are below. Of course  with all new SWGoH characters this content is subject to change. 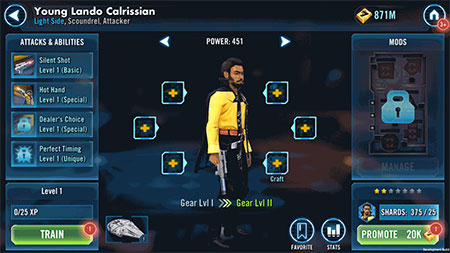 Special Ability 1​: Hot Hand (Cooldown 14) – FINAL TEXT: ​Deal Physical damage to target enemy and inflict Ability Block for 1 turn. At the end of each turn, there is a 50% chance for each debuffed enemy to reduce the cooldown of this ability by 1.

Prepared: If Young Lando Calrissian is Prepared, target other ally becomes Prepared and Lando is no longer Prepared. Then, all Prepared allies gain Speed Up for 2 turns and this ability’s cooldown is reduced by 1. 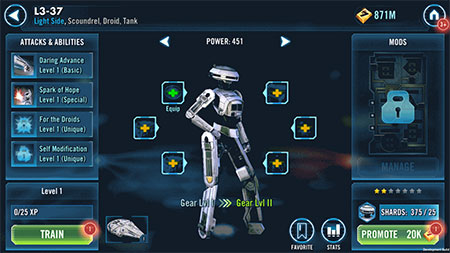 Prepared: Heal all Scoundrel and Droid allies for 30% of L3’s Max Health, then grant all Prepared allies Tenacity Up for 2 turns. If any other allies are Prepared, reduce this ability’s cooldown by 1. L3-37 is no longer Prepared. 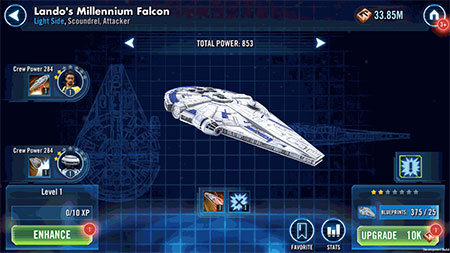 Basic Ability​: Double Down – FINAL TEXT: ​Deal Physical damage to target enemy with a 70% chance to grant Defense Penetration Up to self and another random ally for 2 turns.

Crew 2 (L3)​: Calculated Enhancement  (Cooldown 4)- FINAL TEXT: ​Deal Physical damage to target enemy and Dispel all buffs on them. The Falcon gains +5% Critical Chance and +5% Offense (stacking) for each buff dispelled until the end of the encounter.