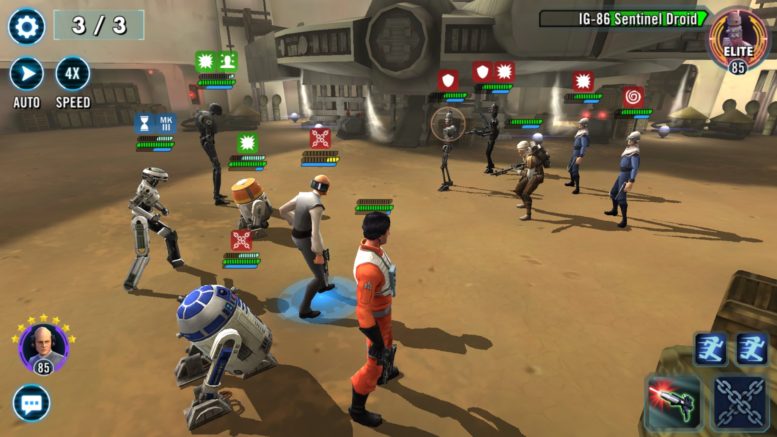 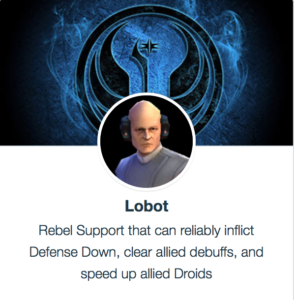 Today’s toon to review mods for is Rebel support Lobot. First introduced to the Star Wars world in Cloud City on his home planet of Bespin in The Empire Strikes Back, Lobot is best known for the AJ^6 cyborg construct on his head and his work for Lando Calrissian. While he had a small role in the Star Wars movies, his role in SWGoH is even smaller. Lobot is basically a forgotten character in Galaxy of Heroes, unless of course you’re making a list of the worst/least valuable characters in SWGoH. That having been said, we will review the best mods for Lobot for those interested in powering him up.

Main Focus: Almost every character needs Speed, and Lobot is no different. He is most valuable against teams that land a lot of debuffs as he can dispel negative status effects and when played alongside droid allies as he gains 5.5% Speed and 5% Tenacity for each living droid ally. Thus, when used with four droids he gains a 22% Speed boost and 20% added Tenacity. That 22% Speed, when alongside a set of Speed mods, can make that 120 base Speed relevant, but starting at 120 Speed really makes this investment a tough one to justify given Lobot’s lack of value in the game today.

Additional Areas to Focus: Potency and survivability in the form of Health would be the other areas to focus on if one was to seriously focus time and materials on Lobot. His basic, Calculated Aggression, can land the Defense Down debuff while his Optimize special dispels negative status effects from all allies and recovers 7% of their Max Health. So while this is not based on Lobot’s Max Health, increasing his Health will still benefit him specifically when the special is used. Because of the relative lack of value in the game for Tenacity and given Lobot already has a base 33% Tenacity and gains 5% Tenacity for each living droid ally with an Omega on his Parallel Processing unique, I would not place any more focus on Tenacity as he should gain enough already. Finally, if you were to use him as a leader, his Cloud Computing leader ability grants droid allies 25 Speed and 10% Potency and has room for a future Zeta ability.

Lobot is one of those characters who is great to place mods on to “store” them for the future and then refer to the filters on swgoh.gg for reference when needed for another character. While the developers at CG will likely give him value in the future through some new piece of content, for now his value is low and we have to be realistic about that. Here is my recommended Mod setup for Lobot: